The GBP/USD currency pair on Friday rallied to a new 7-month high of about 1.3160 after the latest UK election polls showed current PM Boris Johnson’s lead stabilizing at 10 points. The currency pair has bee trading within a consolidative triangle formation since mid-October and Friday’s breakout could help it chart a new path.

The pair later pulled back to return to the normal trading zone of the RSI indicator after venturing into overbought levels in the previous three days.

From a fundamental perspective, the GBP/USD currency pair is trading ahead of a relatively intense period in both the Uk and the US markets. The UK elections are just around the corner and PM Boris Johnson looks likely to take the win and retain his seat. On the other hand, the US-China trade talks appear set to drag well into the latter stages of next year after President Trump hinted discussions could continue well into next year’s US elections.

Looking at the latest round of economic data, the Pound Sterling appears to well-positioned to retain the current bullish sentiment after the US ISM Manufacturing and non-Manufacturing PMIs missed estimates of 49.2 and 54.5 with 48.1 and 53.9, respectively.

Traders now turn their eyes on Friday’s US non-frim payrolls and wage growth for guidance on their next moves. 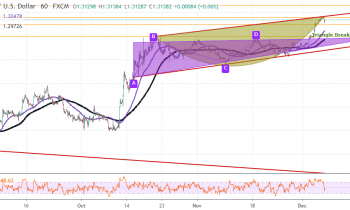 Technically, the GBP/USD currency pair appears to have recently broken out from a consolidative triangle formation thereby pushing the pair to hit a new 7-month high of about 1.3160. However, the pair appears to be facing strong bullish trendline resistance from a previous rally. 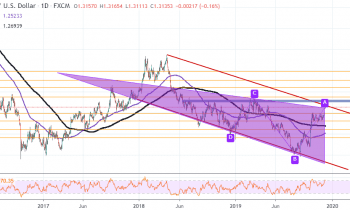 In the daily chart, the GBP/USD currency pair appears to be trading with increased volatility as it forms a bearish widening wedge. The pair also appears to be finding strong resistance at around 1.3200, which could trigger the next pullback.

Having already touched the trendline resistance and now just on the edge of the overbought boundary line the bears will be more optimistic going into next week and could target long-term profits at around 1.2992, 1.2812, or lower at 1.2609. On the other hand, the bulls will look to pounce at around 1.3371, 1.3609 or higher at 1.3778.