GBPAUD has formed lower highs and higher lows to trade inside a descending trend channel on its 1-hour time frame. Price is currently testing the channel top that lines up with the Fibonacci retracement levels.

The 100 SMA is below the 200 SMA to confirm that the path of least resistance is to the downside or that the selloff is more likely to gain traction than to reverse. A larger pullback could test the line in the sand at the 61.8% Fib around 1.8720 and the 200 SMA dynamic inflection point. Note, however, that price is above the 100 SMA dynamic inflection point so there may be a bit of bullish pressure in play.

RSI has yet to indicate overbought conditions or exhaustion among buyers, but the oscillator is already turning lower to hint that sellers are eager to take over. Stochastic is still heading up to show that there is some bullish momentum left. 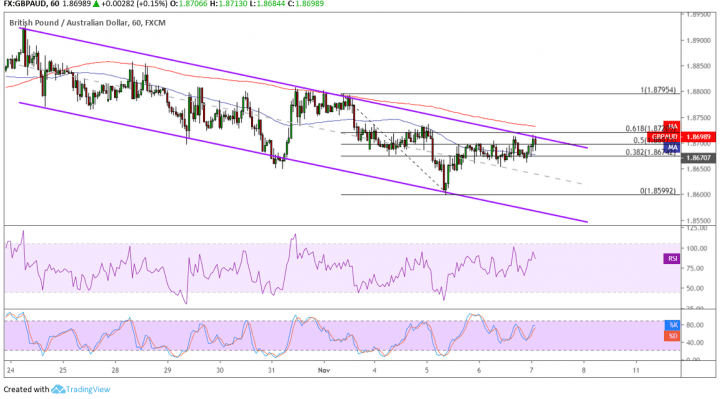 Sterling could be in for additional volatility as the BOE policy decision is coming up, along with the release of MPC meeting minutes and the central bank’s Inflation Report. No rate changes are expected but updated inflation and growth forecasts are due, and any positive revisions on account of the Brexit delay could be bullish for the currency.

Meanwhile, the Aussie took some hits on a fresh set of tensions coming from US-China trade negotiations. As it turns out, Beijing has a new set of demands as negotiations are going on, although investors are hopeful that a deal could be signed before the end of the month. Any indications that an agreement seems far fetched could drag the Aussie further south.

Earlier today, Australia released a stronger than expected trade balance of 7.18 billion AUD versus the estimated 5.10 billion AUD reading and the previous figure, which enjoyed an upgrade from 5.93 billion AUD to 6.63 billion AUD.