GBPCAD has formed higher lows and found resistance at the 1.7050 minor psychological mark to create an ascending triangle pattern on its 1-hour time frame. Price is currently testing the resistance and could be due for a move back to support if it holds.

The 100 SMA is above the 200 SMA to indicate that the path of least resistance is to the upside. In other words, resistance is more likely to break than to hold or support is more likely to hold than to break. Price is trading above the 100 SMA dynamic inflection point so bullish momentum is present, and a larger dip could also find a floor at the 200 SMA dynamic support.

RSI is treading higher to show that buyers still have some energy left, possibly enough to take the pair past the triangle resistance and onto a rally that’s the same height as the chart formation. Stochastic is also on the move up and has enough room to climb before hitting the overbought region. 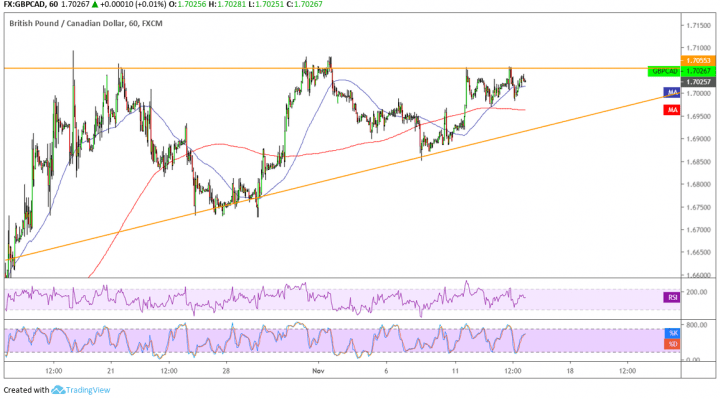 Sterling remains supported as traders no longer seem to be as worried as Brexit troubles for now. The focus is shifting to UK economic data with most figures like the preliminary GDP, CPI, and jobs reports coming in below expectations. The retail sales report is due next and a 0.2% rebound is eyed after the earlier flat reading.

There are no major reports lined up from the Canadian economy, leaving the Loonie sensitive to crude oil price action and overall market sentiment. Positive updates on the trade negotiations between the US and China could once again boost higher-yielding commodity currencies while escalating tensions could drag the oil-related Loonie south.

A breakout in either direction could be followed by a rally or selloff that’s the same height as the triangle pattern.