GBPCAD is pulling up to an area of interest visible on its long-term charts, and this resistance might be enough to keep gains in check. The Fibonacci retracement tool shows the other likely upside barriers.

On the subject of moving averages, the 100 SMA is below the longer-term 200 SMA to indicate that the path of least resistance is to the downside. In other words, the selloff is more likely to gain traction than to reverse. The gap between the indicators is even widening to reflect strengthening selling pressure.

RSI looks ready to head south after a brief test of the overbought region, indicating that buyers are tired and willing to let sellers take over. Stochastic is also in the overbought zone to signal exhaustion among buyers but has yet to head lower to confirm that bears are returning. 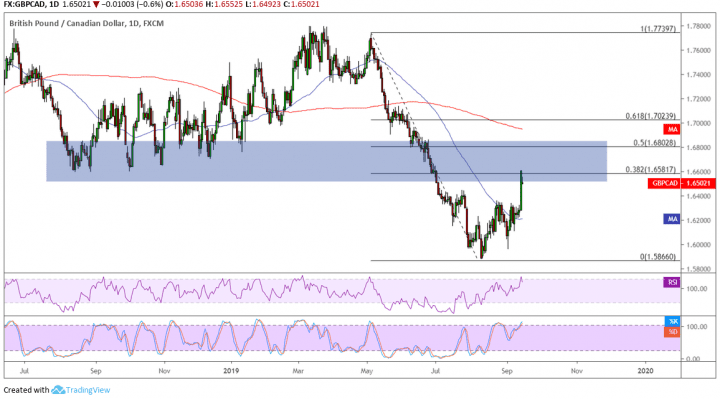 Sterling had a strong run in the previous week as UK lawmakers have been working hard to block a “no deal” Brexit by October 31. As it is, PM Johnson’s prorogation is being challenged by the Scottish court and UK High Court, leaving the ruling up to the Supreme Court this week.

Ruling against the intent to prorogue would give lawmakers more time to push for a deadline extension or force PM Johnson to seek a compromise with the transition deal. Meanwhile, the BOE decision and UK CPI are up for release this week, possibly turning the spotlight back to relatively strong UK fundamentals.

As for the Canadian dollar, the pop higher in crude oil over the weekend could provide some support for the correlated currency.