GBPJPY formed a double bottom pattern on its 1-hour time frame to signal that a reversal from the selloff is due. Price could be ready to test the neckline around the 144.50 minor psychological mark next.

A break past this resistance could take the pair higher by the same height as the chart formation, which spans 141.00 to 144.50 or 350 pips. If resistance holds, a move back to the bottoms could follow.

The 100 SMA is above the 200 SMA to indicate that the path of least resistance is to the upside or that the climb is more likely to gain traction from here. However, the moving averages also seem to be oscillating to reflect range-bound conditions.

RSI is pointing up after recently pulling out of the oversold region, indicating that bullish pressure is picking up and could be enough to take GBPJPY past the neckline resistance. Stochastic is also turning higher from the oversold region to reflect a return in bullish momentum. 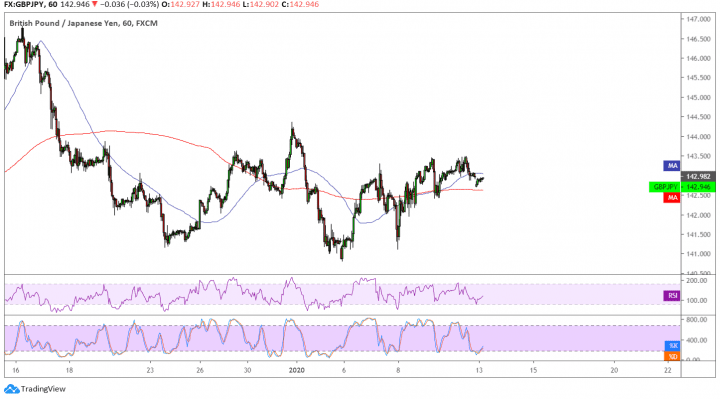 CPI and retail sales data are due from the UK this week, along with the monthly GDP and manufacturing production figures. Traders could also pay closer attention to BOE official Saunders’ speech as he was one of the MPC members that dissented and voted to cut rates in the latest decision.

Meanwhile, the yen is likely to take clues from overall sentiment once more, and it’s worth noting that the lower-yielding currency has been on the decline due to improving risk sentiment. Easing tensions in the Middle East led to profit-taking in safe-haven positions while propping up riskier ones.

BOJ Governor Kuroda has a speech coming up and dovish remarks might also weigh on the Japanese currency, especially if he sounds open to the idea of further easing.