GBPNZD has been trading sideways on its 1-hour time frame, finding support around 2.0050 and resistance just past 2.0300. Price is closing in on the top of the range and could be due for a move back to the bottom if it holds as a ceiling.

The 100 SMA is above the 200 SMA, though, so the path of least resistance is to the upside. In other words, resistance is more likely to break than to hold. Price is also trading above both moving averages to indicate that bullish momentum is in play, but the indicators might merely be oscillating to reflect range-bound action.

RSI is already turning lower to show that sellers are ready to return and take the pair back down to support. Stochastic is pointing down as well, so bears might take over soon. From there, price could test the middle of the range around 2.0150 as it appears to be holding as an area of interest also. 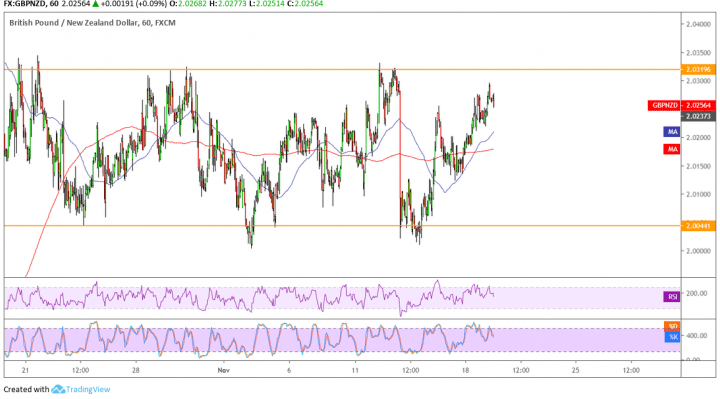 There’s not much in the way of top-tier data from both the UK and New Zealand economy this week, which should pave the way for a range play. Earlier on, New Zealand printed stronger than expected PPI readings to hint at possibly upbeat quarterly CPI for the same period, likely dampening odds of another RBNZ cut soon.

Meanwhile, sterling is taking its cues from opinion polls leading up to the December 12 snap elections. Support for the Conservative party is seen to have grown after PM Johnson mentioned that the candidates have pledged to support his Brexit plan. Still, more signs of political uncertainty or waning support for Tories could bring more uncertainty back in and weigh on the pound.

Other than that, risk sentiment remains as the other potential catalyst for the Kiwi as it could also take cues from trade-related updates between the US and China.