Goldman Sachs Group Inc (NYSE: GS) stock has been volatile, but managed to recover over 0.03% on 17th January, 2020 (as of 11:33 am GMT-5; Source: Google finance).Net income fell to $1.72 billion, from $2.32 billion, in the year-earlier period, as operating expenses rose 42% due to “significantly higher” compensation and provisions for litigation and regulatory proceedings.

GS in the fourth quarter of FY 19 has reported the adjusted earnings per share of $4.69, while reported the adjusted revenue growth of 23 percent to $9.96 billion in the fourth quarter of FY 19. The revenue growth is due to the 7.5% rise in the net interest income to $1.07 billion compared with expectations of a decline to $984.1 million. Investment banking revenue fell 6% to $2.06 billion, global markets revenue grew 33% to $3.48 billion and consumer and wealth management revenue rose 8% to $1.41 billion. Within markets, fixed income, currency and commodities revenue rose 63% to $1.77 billion, above the FactSet consensus of $1.16 billion, while equities revenue grew 12% to $1.71 billion, but missed expectations of $1.75 billion.

Meanwhile, the company has disclosed a $1.09 billion legal charge, which is up from $516 million in the fourth quarter of 2018, as it closes in on a settlement of the so-called 1MDB scandal. That was a nain reason overall expenses reached $7.3 billion, which has easily exceeding analysts’ $5.422 billion estimate in a Bloomberg survey. 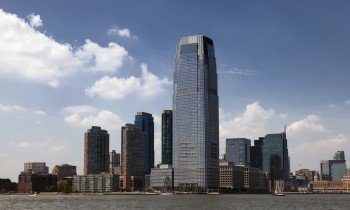 Additionally, GS has sold off its stake in Uber Technologies Inc. after the startup’s disappointing initial public offering in 2019. Goldman had owned about 10 million shares of Uber at the time of the IPO, which turned a $5 million wager using the firm’s own money back in 2011 into a major windfall.

On the other hand, GS has added five executives to its management committee, including co-chief information officers and head of private wealth management. The new members are Tucker York, global head of private wealth management; George Lee and Marco Argenti, co-chief information officers; Asahi Pompey, global head of corporate engagement and president of the bank’s foundation; and Bentley de Beyer, the new head of human capital management. The appointments has increased the size of Goldman’s management committee to 35 and follow the departure of around a dozen partners who left the bank in 2019.