The price of gold (XAU/USD) on Tuesday spiked to top $1,482 for the first time in over three weeks but later trimmed those gains to settle at around $1,476. The price of the yellow metal was trading within a consolidative triangle formation before breaking out on Tuesday but now appears to be facing strong trendline resistance just around the $1,480 level.

The gold price has now drifted into overbought levels of the RSI indicator in the 60-min chart, and this could be what triggered the late pullback. Traders now will be looking to the fundamentals for more guidance on the next stop.

Gold is trading at the back of another Trump tweet which sent stocks spiraling late on Tuesday despite the highly vocal Statesman saying that things are progressing well with China. In the tweet, Trump said that the US-China trade talks could drag on to next year, until after the elections. All major US Indexes lost points in the final hours of trading to end the day below yesterday’s close.

On the other hand, ISM Prices apid missed narrowly with 46.7 versus 47 while construction spending for October was way off the market after posting (MoM) change of -0.8% versus an expectation of 0.4%. Traders will be looking forward to Friday’s non-farm payrolls for guidance on the next move. 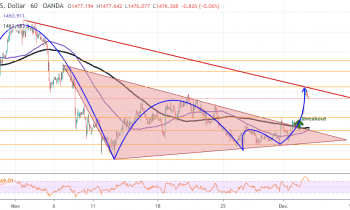 Technically, the price of gold appears to be experiencing a short-term bullish burst following Tuesday’s spike which began with a breakout. The gold price has since ventured into the overbought territory of the RSI indicator in the 60-min chart thereby sparking the late pullback. 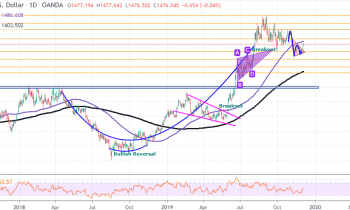 In the daily chart, the price of gold appears to be still trading under considerable bearish pressure despite today’s bullish breakout. The price of the yellow metal faces strong resistance just below the current level of the 100-day SMA at around $1,480 while support can be found at $1,450.