Bitcoin spent it trading session across the Pacific in fears of undergoing a massive downside correction thanks to a textbook bearish reversal pattern.

Traders gathered around the cryptocurrency’s four-hour chart as it formed the so-called Head and Shoulder structure. Some found its appearance ominous enough to predict a price crash towards $20,000. Meanwhile, others expected the price to face limited sell-off pressure but way below the $30,000-support level. 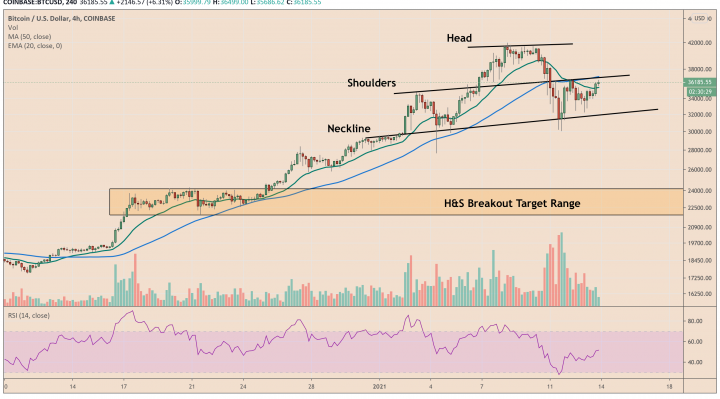 But Bitcoin survived for another day, especially after crashing by around 29 percent from its record high near $42,000 earlier this week. Convinced bulls ensured that the cryptocurrency’s downside bias remain capped near $30,000, which caused it to jump to as high as $36,499 during the US session Wednesday.

Nonetheless, it is merely a fractal. History doesn’t always repeat itself.

Bitcoin has rallied for the last nine months—relentlessly—to log gains over 1,000 percent. Naturally, a 29 percent correction can’t wipe out the very fundamentals that led the cryptocurrency higher. They include dovish global central bank policies, a depreciating US dollar, rising inflation fears, and—at the core of everything—a recession kicked off by the coronavirus pandemic.

Many of these factors are still in play, even as Bitcoin plunges.

The incoming Joe Biden administration in the US has committed to expand government spending. That, in turn, has put the US dollar in a long-term bearish market. The Fed, after all the noise about tapering its infinite bond-buying program and near-zero interest rates, plans to keep supporting the US economy until inflation hits 2 percent or above.

#Bitcoin consolidating at 34k. This is good for a few reasons, 1) market cooling off a bit before next surge is not a bad thing, allows it to build more support at a higher baseline, 2) if you missed BTC on the way up to 41k, you can get it now.

The yield on the 10-year US Treasury note inched above 1 percent on taper tantrum fears, underscoring traders’ uncertainty about Mr. Biden’s stimulus plans and its impact on the Fed’s inflation target. Nevertheless, yields fell during the Wednesday session, that lifted some pressure off the Bitcoin market.

A drop below 1 percent could put the cryptocurrency back en route to $40,000.