Thor Industries, Inc. (NYSE: THO) stock rose 1.53% on September 27th, 2020 and continued its bullish momentum on September 29th, 2020 (as of 1 pm GMT-4; Source: Google finance) rising over 1% after the company posted better than expected results for the fourth quarter of FY 20. The company has reported Net income attributable to Thor for the fourth quarter of fiscal 2020 of $119.2 million compared to net income attributable to Thor of $92.1 million in the prior-year period. The company’s cash and cash equivalents totaled $538.5 million at the end of the year, and THO currently have approximately $660 million available for borrowing on the ABL. 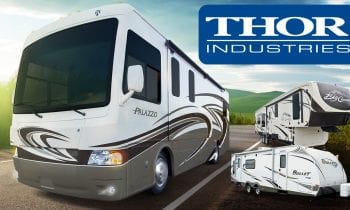 THO in the fourth quarter of FY 20 has reported the adjusted earnings per share of $2.14, beating the analysts’ estimates for the adjusted earnings per share of $1.34. The company had reported flat adjusted revenue to $2.32 billion in the fourth quarter of FY 20, beating the analysts’ estimates for revenue of $2.28 billion. The fourth quarter net sales figure comprised of $1.18 billion from the North American Towable RV segment, $366.5 million from the North American Motorized RV segment, and $739.9 million from the European RV segment. The company delivered the consolidated gross profit margin of 14.9 percent for the fourth quarter of fiscal 2020, compared to 14.4 percent in the corresponding period a year ago. The gross profit margin expanded due to decreased warranty costs as a percent of sales in addition to overhead savings from management-led cost reduction measures in response to COVID-19, which was partially offset by an increase in the material cost percentage primarily due to product mix.

THO anticipates a year of continued growth in fiscal 2021, and the company concur with RVIA’s recent RoadSigns most likely forecast of an approximate 19.5 percent increase in calendar 2021 shipments over their most likely estimate for calendar 2020 shipments.