The Japanese yen is making considerable gains against the US dollar and the euro in the middle of the trading week. The yen’s ascent comes as the central bank intervened in equities, the prime minister provided more details to the government’s stimulus package, and a plethora of economic data that beat market estimates.

On Wednesday, the Bank of Japan (BoJ) acquired another $1.1 billion in stock exchange-traded funds (ETFs). This comes two days after the central bank purchased about $1.2 billion in ETFs, adding to its $1.4 billion in other acquisitions. The BoJ recently confirmed that it is accelerating its purchases of ETFs to support financial markets by up to $11 billion this year.

The BoJ is one of the biggest shareholders on the Nikkei Stock Exchange, holding more than $250 billion in ETFs. The central bank’s direct intervention in equities has been prevalent for years. Japan is not the only country to buy shares on the stock exchange: the People’s Bank of China (PBoC) has been bailing out publicly-traded firms for a long time, and the Swiss National Bank (SNB) has been buying U.S. stocks to fight the appreciation in the Swiss franc. 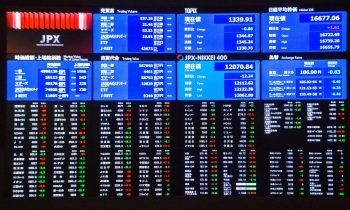 Governor Haruhiko Kuroda has also been pumping tens of billions of dollars into the banking system to ensure financial institutions could weather the economic storm clouds and fight the credit crunch. In total, the BoJ has extended nearly $200 billion to the banks to ensure they can continue lending to borrowers and to use dollar supply operations.

The other major problem for the financial system is its exposure to foreign assets. Since it cut interest rates to below zero, there has been a massive outflow of funds, which has forced banks to hold more than $1 trillion in outstanding foreign claims, up from around $200 billion nearly 20 years ago.