The negative news for the GBP/USD continues piling up, increasing the downward pressure on the GBP crosses and the pair.

About Brexit, there is a fast-approaching deadline for the united kingdom to rest for an extension of this transition period by the end of the year. This has now passed and while the face to face talks between the EU and UK are ongoing, it appears there are very few signs of notable progress.

At the moment, final information that was released on Tuesday showed that the UK economy was on the downward spiral by about 2.2% quarter/quarter over the past 3 months of 2020, with the biggest decline in the GBP for the year 1979. This contraction was principally caused by the countries lockdown that was initiated to reduce the spread of the coronavirus. The latest news in this regard to how the markets over the period have not been forthcoming. Essentially, a new lockdown has now being initiated in Leicester, where there has being a significant increase of COVID-19 infections.

The current damage to the UK’s economy from the pandemic that is ravaging the entire world, has forced Boris Johnson, UK’s prime minister to follow the New Deal strategies of the depression period that were put in place by USA president D.Roosevelt, fast-forwarding the £5 billion expenditure on infrastructural projects. Nevertheless, this hasn’t lifted the GBP/USD that continues trading in a downward spiral as shown in the chart below. 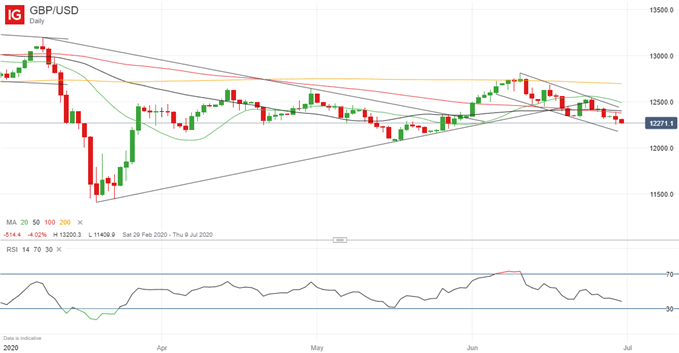 Currency trading is largely expected to become more volatile during this session. This is because of the quarter-end and month-end flows that will most likely also affect forex trading. Technically, the FTSE 100 index of the highly popular London-listed stock that seems to be trading extensively sideways over time. It was found to be down by about 0.5% by early Tuesday.

The GBP shrank to the lowest levels against the USD since early April Wednesdays early trading. The Grim GDP data coming from COVID 19 weighed on the pound. On the other hand, the USD was lifted by the negative comments made on the low-interest rates.

UK’s National Statistics Office (ONS) made reports on Wednesday. They indicated that the gross domestic product shrank by about 5.8% since the match.

Last week, the Bank of England stated that it expects the GDP to fall further by 14% by the end of 2020. If it happens, it will be the biggest decline since the year 1706.