Nasdaq futures rose by almost 1% after yesterday’s Wall Street stocks close after the US stock giants Google, Amazon, Apple, and Facebook smashing earnings expectations. These tech giants are also a larger part of the FAANG group that also includes Netflix. Their market shares surged in after-hours trade, defending the highly elevated valuations in comparison to other stock market sectors such as the industrial shares, real estate and Financials.

Technically speaking, equities spent a large part of the day over the North American sessions rallying after the weakened European and Asia Pacific market hours. Generally, this was sufficient to remove the 0.43% gain in the heavily tech-heavy Nasdaq by the end of the session as the Dow Jones and S&P 500 still managed to finish -0.85% and -0.38% lower respectively. The historical contraction in the united states GDP might have retained most stocks as shown in the red line below.

The Nasdaq 100 stocks are on the top high-pressure key resistance ranging from 10964 to 11058. Technically, this follows the bounce off rising support from April, as shown by the red line below. Keeping this in mind, we can’t say that the index is still in the clear to further extend their gains with prices still slightly changed over the last 2 weeks. Incase the resistance holds steady here, there might be a descent towards this trendline ahead. 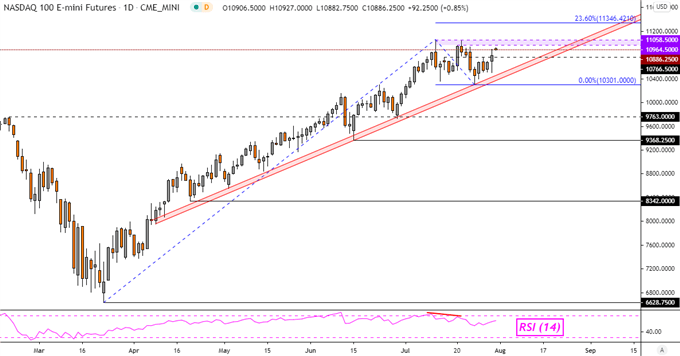 As mentioned earlier, the Asia pacific stock market might follow the new Wall Street trading session higher as traders seem to enjoy the collective earnings surge from major tech players. This might nudge japans and Australia’s stock index, the Nikkei 225 and the ASX 200, higher respectively.

Today, all traders are closely watching Chinese manufacturing and services data. Unlike the US GDP data, these will provide more information into the performance of the world’s 2nd largest economy. Information from china continues its behavior to fully outperform relative to the expectations of the economists.

This might open doors for the uptrend surprise with the economists forecasting the 50.8 print in the manufacturing data. Also, the PMI readings over the 50 indicate the expansion in various activities. Since China is Australia’s biggest trading partner, the rosy print could start the knock-on rally for the local shares, The Great Britain Pounds Stumbles against the US Dollar Amid Release of Unfavorable Economic Event.

Technically speaking the ASX 200 index might be at the risk of turning lower after the prices started falling under the increasing support from March as shown on the red line in the chart below. However, there has been no follow-through in its performance. This significantly undermines the breakout. Resumption of the upside trend involves taking out the resistance, the zone ranging from 6156 to 6198. 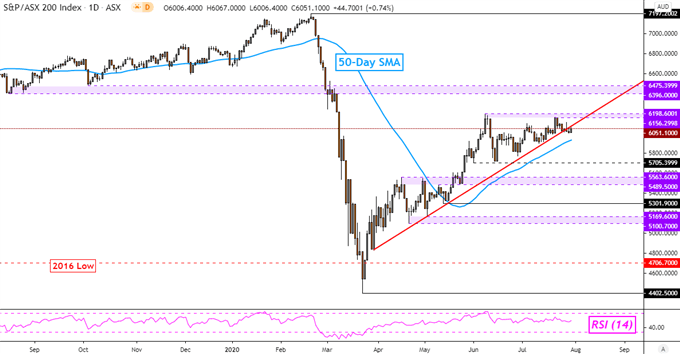