The S&P 500 and Dow Jones index closed at a record peak on Thursday with the continued reflation trade after the Democrats won 2 critical seats in the senate runoff elections. The ‘Blue Wave’ result means that the incoming administration will have control of both the white house and congress. This will greatly help pass their legislative agenda including infrastructure and fiscal spending. The tech-heavy Nasdaq 100 index rose 2.51% led by apple (+3.41%, PayPal (+3.62%), NVidia (+5.78%) and Tesla (+7.9%).

With regards to the macro front, the much-awaited NFP data will be an important parameter for both equity and currency traders. The economics forecast a 71,000 increase in positions in December, which marked a steep drop from 245,000, which was November’s reading. A downside pattern of employment creating might signify a softer job market as the covid-19 linked lockdowns impact business activity. The US Dollar is quite sensitive to the NFP figures and the worse than expected data will possibly led the US Dollar lower as Hang Seng Index Gains As Dow Jones Pulls Back With Crude Oil. 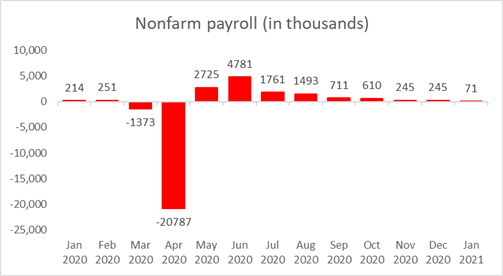 In Asia, Alibaba and Tencent share prices sharply dropped on Thursday after the US threatened to add the 2 Chinese tech giants into the blacklist over the alleged ties to security services and the local military. Also, the NYSE made a new U-turn indicating that it would delist 3 Chinese telecom companies from 11th January, sending inconsistent messages to traders that resulted in heightened price volatility. Moreover, the china mobile dropped 7.2% yesterday. Hang Seng might be able t weather the political headwinds with the Trump administration more titled hawkishly against the Chinese companies before the transition of power on 20th January.

Bitcoin prices hit a new $40,000 level today morning before it slightly rebounded, further stretching the one-month rise above 120%. The cryptocurrencies also outshined other types of asset classes 2021, driven by the weakened US Dollar and increased demand for the hedge against the unlimited quantitative easing (QE). The relentless price rally in bitcoin mirrors a stronger trader appetite for the non-fiat assets.