Natural gas futures are slumping on Thursday as investors take profits following the energy commodity’s meteoric rally in the first couple of weeks of trading in 2022. Has natural gas peaked, or are there more gains to be enjoyed by the bulls?

According to the US Energy Information Administration (EIA), domestic inventories of natural gas declined 179 billion cubic feet in the week ending January 7, topping market estimates of a 173 billion cubic foot drawdown. This is up from the previous week’s withdrawal of 31 billion cubic feet.

Market analysts were not surprised by the immense withdrawal because of freezing temperatures that blanketed the Midwest and Plains. Industry observers also note that some freeze-offs have tightened the market in recent days, adding pressure to the supply-demand balance.

Looking ahead, the weather models suggest that the peak of the deep freeze could happen in the final ten days of January, something that could impact gas-producing basins. 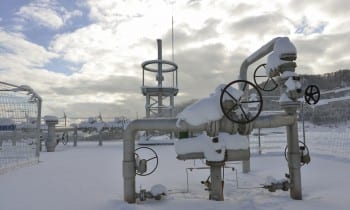 This, industry analysts say, could lead to drawdowns of at least 200,000 billion cubic feet for the next three to four weeks.

As a result, some experts think that the market could climb to $5 sometime this winter.

“The return of shorts may lead to a retest of support in the immediate term, but heightened price volatility is likely to endure over the next seven to 10 days,” EBW Analytics Group senior analyst Eli Rubin in a note to clients. “While the seasonal outlook does not suggest the need for gas prices near $5.00, short-term fundamental drivers remain supportive.”