Natural gas is heading further south but appears to be stalling at a near-term support zone. This could pave the way for a pullback to nearby Fib levels that line up with an area of interest.

The 100 SMA is below the longer-term 200 SMA to indicate that the path of least resistance is to the downside. In other words, the downtrend is more likely to gain traction than to reverse. The gap between the two is also wide enough to suggest that there’s no imminent risk of a new crossover at the moment.

RSI is turning higher from the oversold region to signal a return in bullish pressure. This could be enough to take natural gas back up to the retracement levels or even until the 200 SMA dynamic resistance. Stochastic has also been indicating oversold conditions for quite some time and moving higher signals that buyers are taking over. 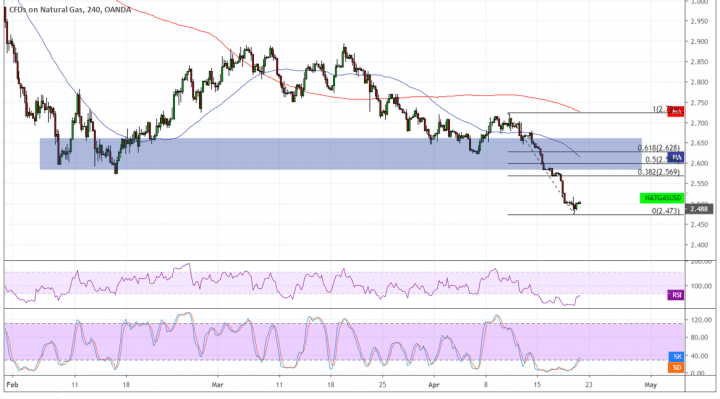 Natural gas seems to be veering away from its commodity peers like crude oil which are racing to new highs recently. For one, seasonality does suggest a drop in demand for heating commodities these days as warmer months are setting in.

Furthermore, the fact that prices have tumbled below the long-term floor also drew more selling pressure. Analysts point out how natural gas is in “no man’s land” at the moment and could keep dropping in the weeks ahead.