Natural gas continues to trend lower inside a descending channel on the 1-hour time frame and is currently bouncing off support. A correction to the top of the channel around $1.650 might follow.

The Fibonacci retracement tool also shows nearby resistance levels. In particular, the 38.2% Fib lines up with the mid-channel area of interest where sellers might be waiting. A larger pullback could find resistance at the 50% Fib near the $1.600 mark or the 61.8% level at $1.621.

The 100 SMA is below the 200 SMA to indicate that the path of least resistance is to the downside or that the selloff is more likely to gain traction than to reverse. The gap between the moving averages is pretty narrow, though, so a crossover might still be possible. If that happens, more buyers could take over and push for a reversal from the selloff.

Volume has been elevated to signal that the recent trend could be sustained. ADX is also above 25 to confirm that trending market conditions are in play.

Stochastic is pulling up from the oversold region for now to show that buyers are taking over while sellers take a break. The oscillator has plenty of room to move north, so price could keep following suit until overbought conditions are met. 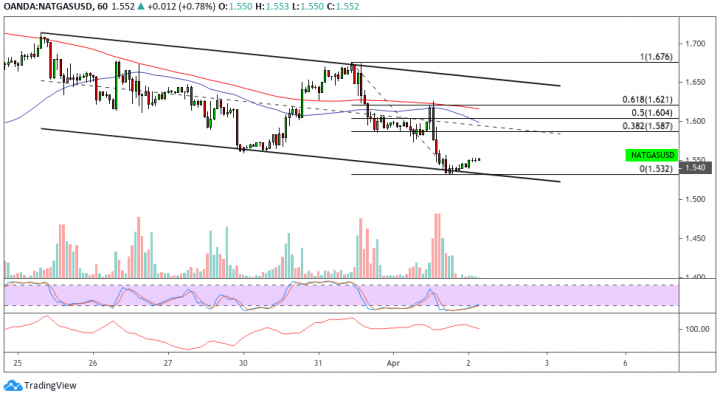 Natural gas remains under downside pressure as risk-off flows have been observed in financial markets on account of the COVID-19 outbreak. Although some nations have been seeing improvements and massive stimulus efforts are being made, investors are still pricing in a prolonged downturn in the global economy that could mean more downside for riskier assets like commodities.

Also, warmer weather conditions are setting in across the US, which means lower demand for heating commodities like natural gas over the next few months.