Natural gas surged higher and climbed past its mid-channel area of interest visible on the 4-hour chart. This puts price on track to test the top of the channel next.

However, the 200 SMA is holding as dynamic resistance at the moment and could be enough to keep gains in check. The 100 SMA is also below the 200 SMA to confirm that the path of least resistance is to the downside or that the downtrend is more likely to gain traction than to reverse. Also, the gap between the indicators is widening to reflect strengthening selling pressure.

In that case, natural gas could fall back to the mid-channel area of interest next or even make it back down to the channel support soon. Stochastic is already indicating overbought conditions or exhaustion among buyers, and turning lower could draw sellers back in.

Volume remains elevated and volatility is still in play. However, ADX is below the 25 level to suggest that consolidation could come in play. 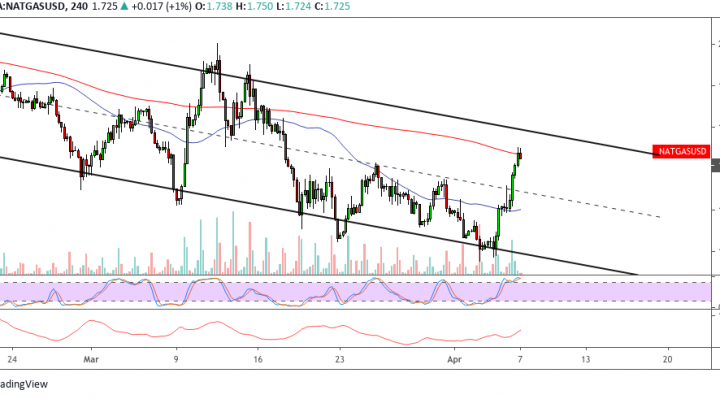 Natural gas ticked higher over the weekend as weather conditions have been slightly cooler than expected, thereby driving up demand for heating commodities. Also, producers have already trimmed output in anticipation of lower purchases, so supply has also been lower.

“The strongest cold relative to normal lies in the Plains and Midwest, but the East shares in some chill as well, something that was almost totally absent in winter,” Bespoke said. “These changes now increase the likelihood that this April will turn out to be quite a bit colder than last April, though not as cold as in April 2018.”

Genscape Inc. data showed that production was averaging 92.3 Bcf/d, which is coming in about 0.94 Bcf/d lower versus March’s average from the weekend and Monday. Looking ahead, another decline in inventories could keep prices supported.