Natural gas broke above the neckline of its double bottom pattern to confirm that a reversal from the long-term slide is underway. The chart pattern spans around $0.500 so the resulting climb could be around the same height.

The 100 SMA is still below the 200 SMA, though, so the path of least resistance is to the downside. In other words, there’s a chance that the selloff might still resume from here. Then again, the gap between the indicators is narrowing to show slowing selling pressure and hint at a possible crossover later on.

RSI already made it to the overbought zone to reflect exhaustion among buyers, and turning lower could confirm that sellers are taking over. Similarly stochastic is in the overbought zone, so buyers could use a break and let selling pressure kick in, possibly resulting in a retest of the broken neckline. 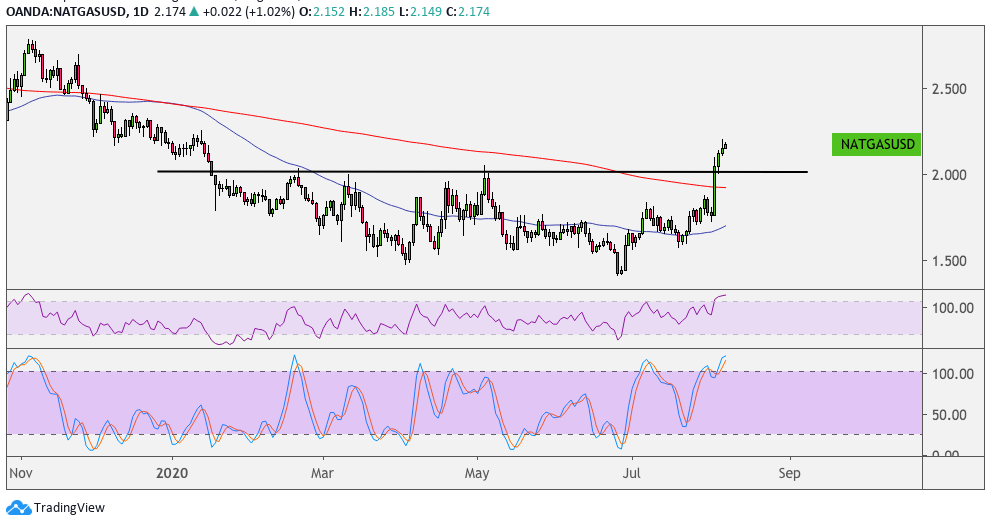 The commodity is drawing support from forecasts that the typhoon season in parts of the United States could disrupt natural gas production along the coast. In addition, traders are starting to price in stronger demand as cooler months are approaching.

In particular, temperatures typically drop around September, which would mean stronger purchases of heating commodities like natural gas. If another wave of coronavirus infections prompt more lockdown measures in the coming months, this would also mean more households buying larger quantities of heating commodities until the end of the year up to early 2021.

Risk appetite stemming from expectations of more stimulus from governments and central banks could also keep businesses and consumers optimistic, which might then factor into better performance for higher-yielding assets like commodities.

The upcoming NFP release might also have a strong impact on market sentiment as upbeat results could keep risk-on flows present while downbeat data could spur profit-taking before the end of the week.