Natural gas looks prime for another major pullback as it hit resistance around $2.230 and might test the rising trend line support on its 4-hour chart.

The Fibonacci retracement tool shows where more buyers might be waiting. The 61.8% level lines up with the 100 SMA dynamic inflection point at $1.919 while the 38.2-50% levels are close to the $2.000 major psychological mark.

A large correction could make an actual test of the trend line around $1.900. The line in the sand for a bullish pullback, however, could be at the 200 SMA dynamic inflection point just below the $1.800 mark.

The 100 SMA is above the longer-term 200 SMA to confirm that the path of least resistance is to the upside or that the uptrend is more likely to resume than to reverse. The gap between the indicators is also widening to reflect stronger bullish momentum.

RSI is on the move down, though, so price could follow suit as selling pressure is in play. Stochastic is also heading south but approaching the oversold region to signal exhaustion. Once both oscillators hit the oversold region and turn back up, bullish momentum could return and push natural gas back to the swing high or higher. 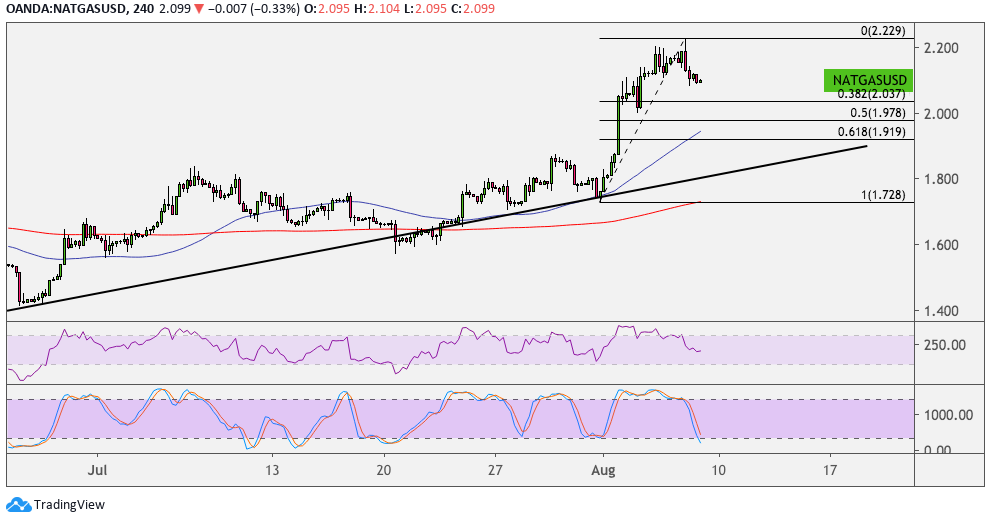 Natural gas enjoyed a lot of upside earlier in the week when The Global Gas Report 2020 published by the International Gas Union and Italian gas infrastructure firm Snam indicated that the trend of increased natural gas demand, which was already observed before the pandemic, will continue after the pandemic is under control.

At the same time, cooler temperatures all over the US as summer months are about to end could also ramp up demand for heating commodities like natural gas. The typhoon season impacting Gulf states over the past few days is also keeping production in check, which could mean more bullish pressure for prices.