Natural gas is starting to trend higher inside a small ascending channel visible on its 1-hour time frame but is approaching several resistance levels close by.

Price is still moving below a longer-term descending trend line and it looks like the Fibonacci retracement levels might also hold. The commodity is currently at the 38.2% level around $2.156 and could be due to resume its slide from here. A larger correction could last until the 50% level at the top of the small channel and is also near the trend line.

If any of the Fibs hold as resistance, natural gas could resume the slide to the swing low at $2.038 or lower. However, the 100 SMA seems to be crossing above the longer-term 200 SMA to indicate that the path of least resistance is to the upside. In other words, resistance might be more likely to break than to hold, and price might also treat these indicators as dynamic support.

RSI looks ready to turn lower after a brief stay in the overbought zone, possibly indicating a return in selling pressure. Stochastic is also around the overbought region to signal exhaustion among buyers and a pickup in bearish momentum down the line. 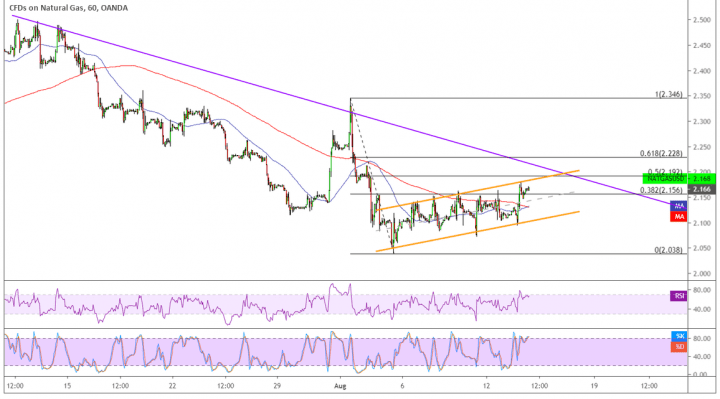 Commodities remain under pressure on account of risk-off flows from the previous weeks as resurfacing trade tensions threaten to curb demand further. It doesn’t help that natural gas is already hurting from seasonally lower purchases around this time of the year.

Still, there could be some upside as more weather disturbances could dampen production in certain parts of the US. Short-term volatility is likely to result from inventory reports due later in the week, with large buildups likely putting more downside pressure on natural gas price.