Natural gas has formed lower highs and higher lows inside a descending channel on its daily time frame. Price is currently pulling up to the Fibonacci retracement levels that might keep gains in check.

The 100 SMA is below the longer-term 200 SMA to indicate that the path of least resistance is to the downside. In other words, the selloff is more likely to gain traction than to reverse. Price is already finding resistance at the 100 SMA dynamic inflection point that lines up with the 50% level, so a move back to the swing low at $2.041 or the channel bottom might follow.

A larger pullback could last until the 61.8% Fib at the $2.328 level that lines up with the channel resistance. A break above this could be an early indication of a downtrend reversal.

RSI has room to climb before reaching the overbought zone to signal exhaustion so buyers could stay in control for a bit longer. Stochastic has more ground to cover, which means that bulls could stay in the game until overbought conditions are met. 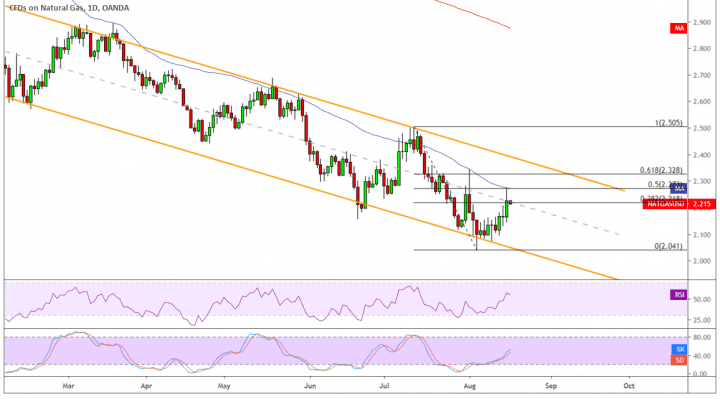 “A huge range in national survey averages for today’s EIA weekly storage report from +54 to +61 Bcf, although with the most notable ones around +57-58 Bcf, larger than the 5-year average of +49 Bcf. It was hotter than normal over most of the country besides portions of the Northern Plains and east-central US.”

“Strong high pressure will dominate the southern US with highs of 90s to 100s, hottest over the Southwest & Texas for strong demand. Weather systems with cooling will sweep across the Midwest and Northeast through the weekend with highs of 70s and 80s for only light to moderate demand.”