Natural gas is trending lower on its 1-hour chart and price is testing the descending channel bottom. A pullback to the top of the channel might follow from here, and the Fibonacci retracement tool shows the potential resistance levels.

The 61.8% Fib is closest to the channel top around $2.308 while the 38.2% level lines up with the mid-channel area of interest at $2.240. The 50% level coincides with the 100 SMA dynamic inflection point, which is below the 200 SMA to confirm that the path of least resistance is to the downside. In other words, the selloff is more likely to gain traction than to reverse.

Also, the gap between the indicators is widening to reflect increased bearish momentum. The 200 SMA lines up with the channel top to add to its strength as a ceiling.

RSI is moving higher to show that bullish momentum is in play, and the oscillator looks ready to cross the center line to reflect stronger upside pressure. Stochastic just turned lower after reaching the overbought region, hinting at a possible return for sellers, which might already push price to the swing low or channel bottom. 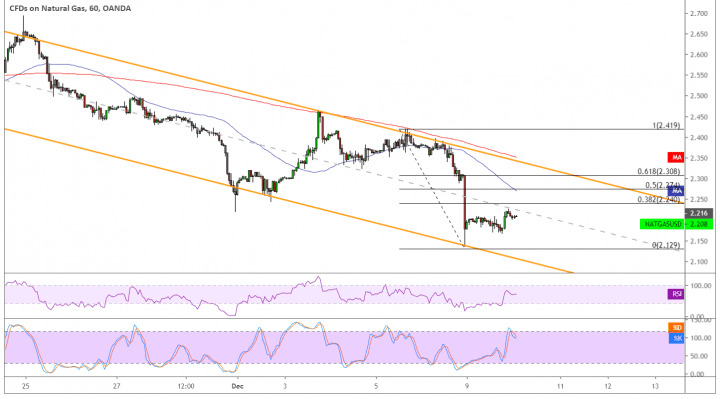 Natural gas remains on weak footing as temperatures in the US haven’t been cold enough to warrant a strong seasonal jump in demand. Traders are also keeping tabs on new pipelines in China, as well as its deal with Russia, to see if global demand for LNG can still pick up.

For now, traders might take their cues from the next set of inventory data, which might reveal a slight build in stockpiles. A larger than expected increase could bring more bearish pressure as traders continue to worry about oversupply in the market, especially if temperatures don’t drop as much anytime soon.