Natural gas is still trading inside its ascending channel visible on longer-term time frames as price bounced off support at $104. However, price is also in a short-term downtrend as the highs are connected by a falling trend line.

RSI is already on its way down after recently hitting the overbought region, indicating that sellers are taking over while buyers take a break. Stochastic is also moving south, so price could follow suit while bears are in control. In that case, natural gas could make another test of the channel bottom or perhaps attempt to break lower. 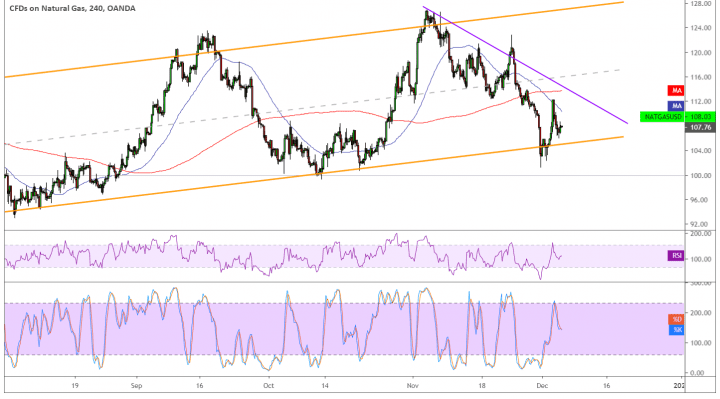 Prices could take cues from inventory data next, as the US Energy Information Administration is expected to report a 21 Bcf withdrawal for the week ended November 29, according to a survey of analysts by S&P Global Platts. In that case, the commodity could make another leg higher as a draw would reflect strong demand.

On the other hand, a large build in stockpiles could mean that oversupply might still be a concern or that demand has been feeble. Apart from that, any major swings in overall market sentiment could determine where the commodity price is headed for the rest of the week.