Natural gas is trending lower inside a descending channel visible on its short-term time frames. Price is bouncing off the top of the channel and the updated downside targets are shown below.

Price is closing in on the 38.2% Fibonacci extension level around $1.815, but stronger selling pressure could take it down to the next support at the 50% Fib that lines up with the mid-channel area of interest around $1.800. From there, natural gas could move further south to the 61.8% extension at $1.779 or the 78.6% level that coincides with the swing low. The full extension is located at $1.721.

The 100 SMA is below the 200 SMA for now to confirm that the path of least resistance is to the downside or that the selloff is more likely to gain traction than to reverse. The gap between the indicators has narrowed to reflect slowing bearish momentum and a looming bullish crossover. If that pushes through, more buyers could return and push for a break past the channel top.

RSI is still heading south to show that selling pressure is in play, but the oscillator is already approaching oversold levels to signal exhaustion. Stochastic is dipping into the oversold territory to show that sellers could use a break and let buyers take over. 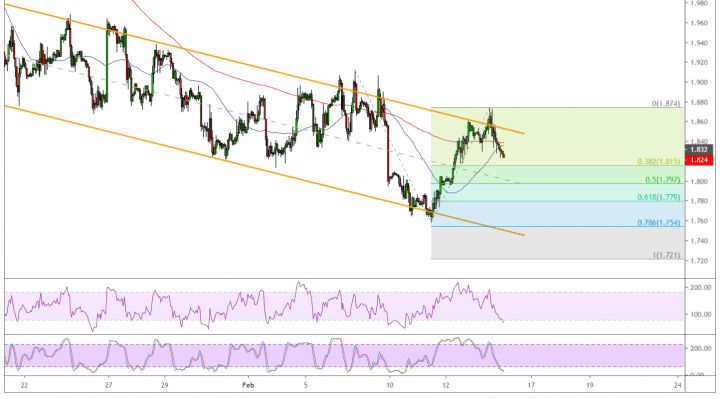 Natural gas drew a boost from a pickup in risk-taking earlier on as headlines suggested that the rate of increase in coronavirus cases and fatalities may be slowing. However, a change in methodology for counting confirmed cases has brought risk-off flows back in due to a huge jump in numbers.

Also, expectations of cooler weather conditions has propped the commodity higher as analysts projected higher demand in the weeks ahead. Of course this has to be supported by actual figures in inventory data or temperatures for the commodity to keep up its climb.