Natural gas is trading inside a short-term ascending channel on its 1-hour time frame as it formed higher highs and higher lows since January 6. Price is testing the top of the channel and could be due for a pullback to support next.

Applying the Fibonacci retracement tool on the latest swing low and high shows that the 38.2% level lines up with the mid-channel area of interest while the 61.8% level is closer to the channel support at $2.120. If any of these hold as a floor, price could recover to the swing high at $2.176 or the channel top closer to $2.180.

The 100 SMA is below the 200 SMA to indicate that the path of least resistance is to the downside or that the selloff is more likely to gain traction. The gap between the indicators is narrowing to signal weakening selling pressure and a potential bullish crossover. The 100 SMA lines up with the 38.2% Fib as well, adding to its strength as support.

RSI is pointing down to show that selling pressure is in play, and this oscillator has plenty of room to go before indicating oversold conditions. Stochastic just reached the overbought region to reflect exhaustion among buyers and a likely pickup in bearish momentum. Both oscillator have plenty of room to move south, so natural gas price could follow suit. 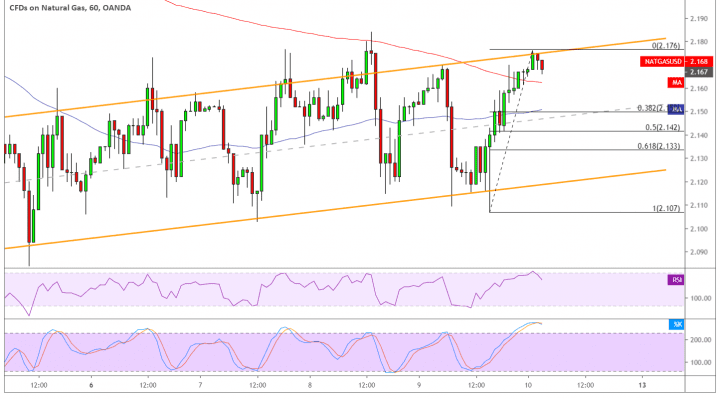 Natural gas seems to be grinding higher in anticipation of cooler temperatures and stronger demand in the months ahead, even as supply levels remain elevated. Weather forecasts suggest that milder conditions could finally take hold, albeit later than usual, and spur increased purchases of heating commodities.

At the same time, easing geopolitical tensions are also supporting gains for commodities, although a lot of uncertainty still looms. Worsening tensions could spur more declines for natural gas.