Natural gas is finding support at the broken short-term resistance around $2.160 and could set its sights on the Fibonacci extension levels next. Technical indicators are confirming that the climb is more likely to gain traction from here.

The 100 SMA crossed above the 200 SMA to confirm that the path of least resistance is to the upside or that support is more likely to hold than to break. The gap between the two is also widening to reflect stronger bullish momentum.

RSI is on the move up and has plenty of room to head north before reflecting overbought conditions. This suggests that buyers could stay in the game longer and price might follow suit. Stochastic is also pulling up after recently dipping into the oversold area, indicating that bulls are taking over while sellers take a break. 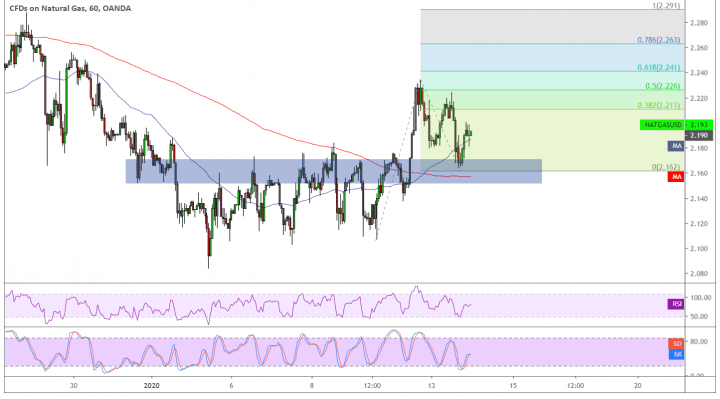 Natural gas seems to be picking up on the increase in demand as cooler temperatures set in. Previously, the weather has been warmer than usual, dampening demand for heating commodities.

At the same time, improving risk sentiment is also bullish for natural gas these days, thanks to easing tensions in the Middle East. If this keeps up, the commodity might see more upside.

Near-term volatility could be driven by inventory data from the Department of Energy as a draw in stockpiles could bring more bullish pressure while a large build could erase recent gains. Note that producers have ramped up supply in anticipation of winter demand, but it looks like the seasonality factor has kicked in late.