Natural gas broke below the rising trend line support to signal that a reversal from the climb is underway. Price might still pull back to the broken support area before resuming its slide.

Applying the Fibonacci retracement tool on the latest swing high and low shows that the area of interest is spanned by the 50% to 61.8% levels. If these are enough to hold as resistance, price could fall back to the swing low at $2.105 or lower.

The 100 SMA is still above the 200 SMA to indicate that the path of least resistance is to the upside or that support is more likely to hold than to break. However, the gap between the indicators is narrowing to reflect slower bullish momentum and a potential bearish crossover. The 200 SMA is also close to the 61.8% Fibonacci retracement level to add to its strength as a ceiling.

RSI is heading higher to show that buyers are taking over while sellers take a break. Stochastic is also on the move up to indicate that bullish momentum is kicking in. Both oscillators have room to climb before reflecting overbought conditions or exhaustion among buyers. 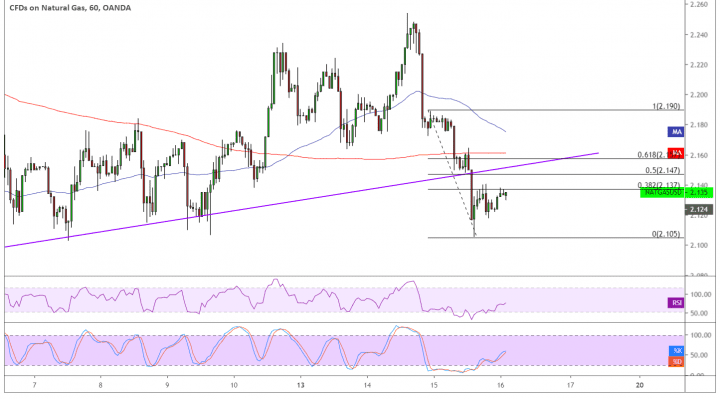 The Department of Energy is due to report its natural gas inventory levels later in the day and might show a draw of 91B versus the earlier reduction of 44B. A larger draw could signal that demand is strong and enough to keep up with the pickup in output as producers anticipated stronger purchases in cooler months.

Still, temperatures have been mostly milder than expected and forecasts suggest that cooler weather could kick in late. Even so, weather disturbances in certain parts of the US could usher in stronger demand for heating commodities and possibly even disrupt production in some states.