Natural gas recently broke below a long-term rising trend line visible on the daily time frame. Price seems to have completed its retest of the broken support and could resume the drop to the next downside targets.

The 100 SMA is below the 200 SMA to indicate that the path of least resistance is to the downside or that the selloff is more likely to resume than to reverse. The 100 SMA is also currently holding as dynamic resistance as it lines up with the broken trend line.

RSI has some room to head higher before reflecting overbought conditions, though, so a larger pullback might still be possible. Stochastic is also on the move up to suggest that there is some bullish pressure left. 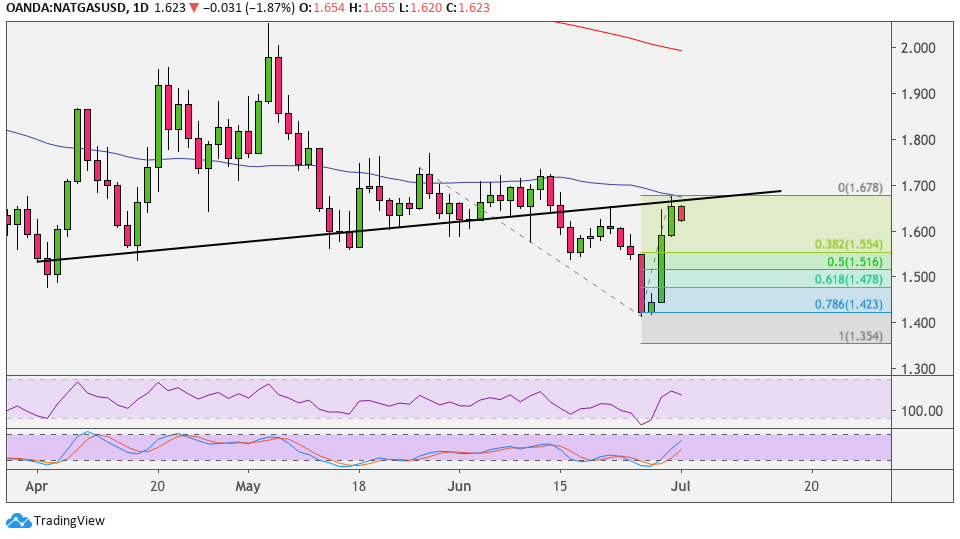 Natural gas remains under some downside pressure but was able to pick up on improvements in risk appetite lately. The Energy Information Administration is expected to report an increase of 77 Bcf in stockpiles versus the earlier gain of 120 Bcf, which would reflect a pickup in demand.

A larger than expected build could indicate weaker demand for heating commodities as warmer temperatures have been observed all over the US while summer months are setting in. A surprise draw, on the other hand, could signal that purchases have picked up even with warmer weather conditions.

The upcoming NFP release could impact overall market sentiment later on in the week, though, as another large increase in joblessness would likely mean a dip in consumer spending and business activity. In turn, this could weigh heavily on demand for higher-yielding assets like commodities.