Natural gas formed higher lows and higher highs to create an ascending channel on its 1-hour time frame. Price is bouncing off the channel top and has retreated to the mid-channel area of interest.

This lines up with the 38.2% Fibonacci retracement level at $2.414. A larger pullback could last until the channel bottom closer to the 61.8% Fib and the 200 SMA dynamic inflection point around $2.362.

The 100 SMA is above the longer-term 200 SMA to indicate that the path of least resistance is to the upside. In other words, the uptrend is more likely to gain traction than to reverse. Price has already fallen below the 100 SMA to signal that bearish pressure is returning. 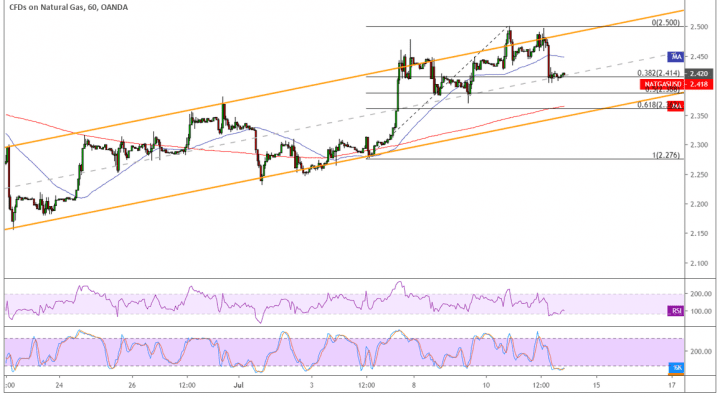 Natural gas is under downside pressure as stockpiles rose by 81 Bcf versus the projected 71 Bcf increase but smaller than the earlier 89 Bcf gain. This confirms that production remains elevated while demand has weakened on account of warmer weather conditions settling in across the US.

Still, the commodity could find support at nearby levels as the dovish Fed minutes kept hopes of a rate cut in play. Expectations for a cut in their next meeting could be enough to shore up natural gas in the weeks ahead, especially if economic reports disappoint.

Apart from that, improving trade conditions could also be a bullish boost for commodities as this would keep demand supported. Any signs of tensions, however, could spur a break below the channel bottom and a possible reversal for natural gas.