Natural gas broke above a descending trend line visible on the 4-hour chart to signal that a reversal from the selloff is in order. Price has since pulled back to the broken resistance, which now seems to be holding as support.

The 100 SMA is still below the 200 SMA to indicate that the path of least resistance is to the downside or that the selloff is likely to resume. Price is finding support at the 100 SMA dynamic inflection point, but the 200 SMA is currently holding as dynamic resistance.

RSI still seems to be on the move down after recently topping out at the overbought zone, indicating that sellers are returning while buyers take a break. Stochastic is also heading south, so price could follow suit while bearish pressure is in play. 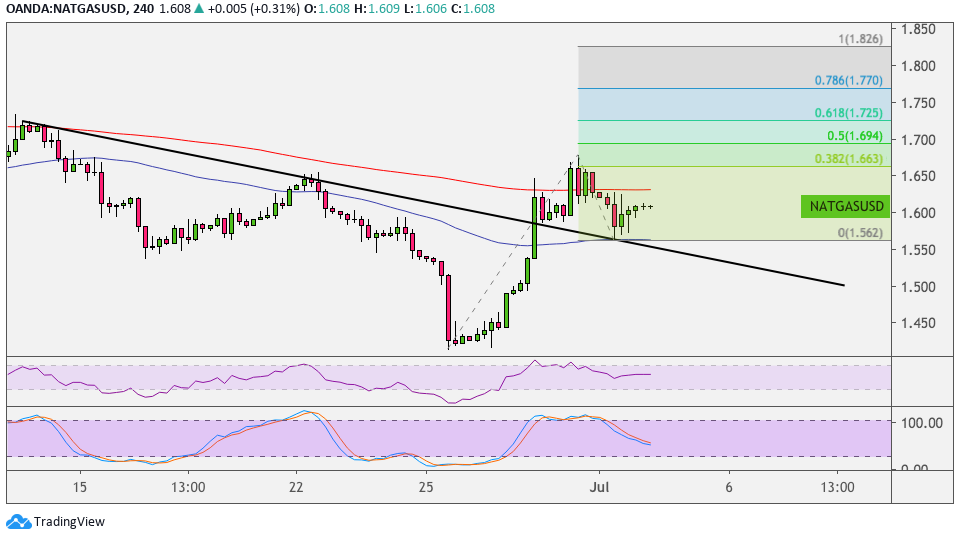 The Energy Information Administration is due to report its inventory numbers on natural gas later in the day, possibly printing an increase of 77 Bcf. If so, this would be lower than the earlier gain of 120 Bcf, reflecting a slight pickup in demand. A smaller than expected build could be more bullish for the commodity price.

Keep in mind, however, that warmer weather conditions have been observed all over the US as summer months have set in. Higher temperatures could be observed in the coming weeks, which would mean even lower purchases of the heating commodity and possibly more downside pressure on prices.