Natural gas is on a short-term uptrend as the recent lows of price action can be connected by a rising trend line visible on the 1-hour time frame. This support area has been holding for a week, and it looks like price is due for another test soon.

The 100 SMA is above the 200 SMA to confirm that the climb is more likely to gain traction than to reverse. The 100 SMA also lines up with the trend line to add to its strength as support, and the gap between the indicators is widening to reflect stronger bullish momentum.

RSI is heading south to reflect the presence of selling pressure, so price could follow suit and pull back from the climb. Stochastic is also on the move down, so the correction could keep going until the oscillators reach oversold conditions to indicate exhaustion among sellers. Turning higher could confirm that buyers are about to take over. 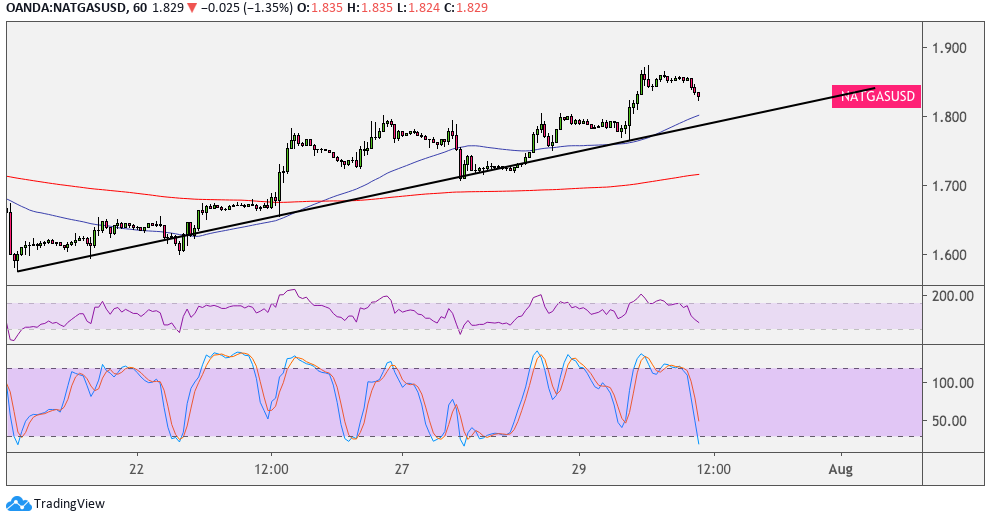 Natural gas prices are advancing ahead of the inventory report from the Department of Energy as a lower build in stockpiles is eyed. Analysts are projecting a gain of 25 Bcf compared to the earlier increase of 37 Bcf, which might reflect stronger demand.

Keep in mind, however, that warmer temperatures have been recorded in several parts of the US so demand for heating commodities likely took more hits. Then again, the threat of tropical storms along the coast where producers are located also limited supply in the past few days.

A larger than expected build in stockpiles could be bearish for natural gas and spur a break below the uptrend support while a smaller build or an actual draw could bring more gains in. The advance US GDP release is also worth watching as this could have a strong impact on risk appetite across the board.