Natural gas has formed higher lows connected by a rising trend line since late June, and it looks like the commodity is due for a pullback to this support area again.

Applying the Fibonacci retracement tool on the latest swing low and high shows where buyers might be waiting. The 50% Fib is close to the trend line around $1.765 while the 61.8% level is slightly beow it at $1.747.

The 100 SMA is above the 200 SMA to confirm that the path of least resistance is to the upside or that support levels are more likely to hold than to break. The gap between the indicators is widening to reflect strengthening bullish momentum, and the 100 SMA is close to the 50% Fib and trend line to add to its strength as a floor.

RSI is still heading south to signal that bearish pressure is still present and that the correction is still ongoing. The oscillator is nearing the oversold region to signal potential exhaustion among sellers, during which buyers can take over.

Stochastic is also moving down but already testing the oversold region, and turning higher could confirm that buyers are returning. In that case, natural gas could recover to the swing high at $1.837 and beyond. 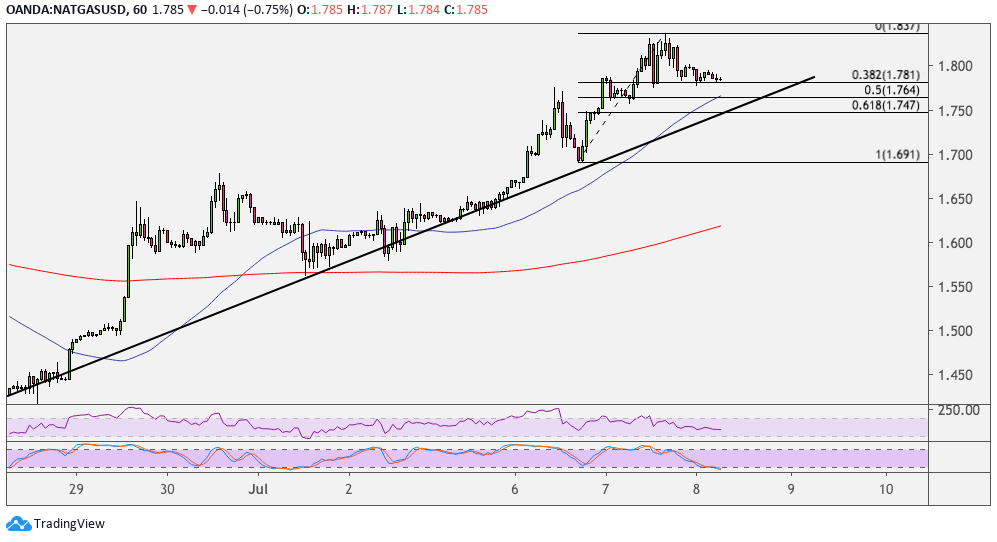 Natural gas enjoyed a lot of upside when news broke out of Warren Buffet’s stake on the commodity through his company Berkshire Hathaway’s latest investment. This deal is set to close towards the end of the year but was enough to draw market interest in the commodity, which could enjoy stronger demand soon.

Keep in mind, however, that seasonal factors are limiting natural gas price gains as the heating commodity suffers from weaker demand around this time of the year. After all, warmer temperatures are observed now that summer months have set in and could stay in place for a few more months.