Natural gas is gaining traction on its bounce off the bottom of the falling channel and might be due for a pullback to the top. A small double bottom has formed to signal a reversal from the short-term slide.

The 100 SMA is still below the 200 SMA to indicate that the path of least resistance is to the downside or that resistance levels are more likely to hold than to break. A shallow correction could already hit a ceiling at the mid-channel area of interest around $1.700 then resume the drop to the latest slows near $1.500.

RSI is still heading up to show that there is still a bit of bullish pressure left. The oscillator is closing in on the overbought zone, though, so selling pressure might return soon. Stochastic is already indicating overbought conditions and turning lower could confirm that sellers are taking over. 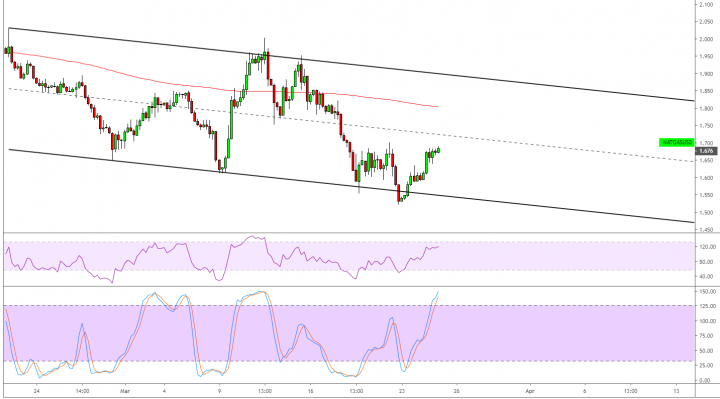 A bit of risk-taking can be observed in the markets as investors turn their attention to stimulus efforts being announced by governments and central banks. In particular, traders are waiting on the coronavirus aid package to be voted on by the U.S. Congress as this could usher in business optimism and stronger demand for commodities.

Then again, some say that the announcement has been priced in, so profit-taking might be in order after the plan is approved. If it fails to boost sentiment, commodities like crude oil could take more hits.

Meanwhile, more states and countries are calling on lock downs, which could mean even weaker purchases of commodities and a prolonged downturn in business sentiment. India and New Zealand are among these countries, and this could bring an even larger dent to global economic activity.