Natural gas could form an inverted head and shoulders pattern on its 1-hour time frame as price pulls back to the area of interest around $1.600. If this holds as support, the reversal formation could be completed and have its neckline at the $1.700 mark.

A break above the neckline could set off a climb that’s the same height as the chart formation, which spans $1.525 to $1.700. However, price is still below the 200 SMA to signal that the path of least resistance is to the downside or that resistance levels are more likely to hold than to break. The 200 SMA also recently held as dynamic resistance.

RSI is already indicating oversold conditions and pulling higher, though, so a return in bullish pressure might be due. Stochastic has some room to move south before reaching the oversold territory to reflect exhaustion among sellers, but turning back up could suggest that bulls are ready to return. 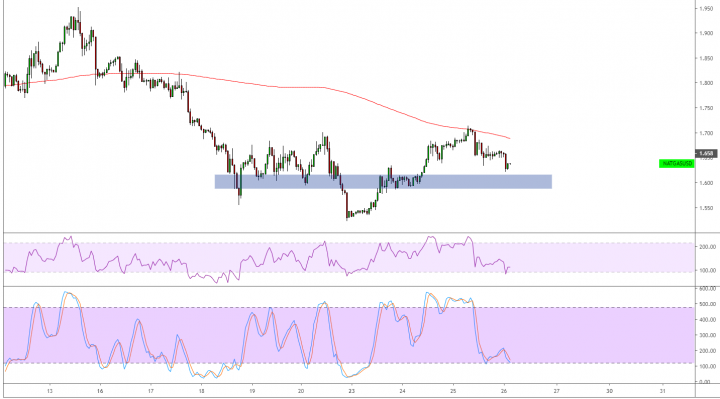 Natural gas is still on weak footing as traders anticipate weaker demand on account of warmer temperatures across the US as spring rolls in. Producers have already trimmed output to account for lower purchases in the months ahead, but it looks like demand remains very feeble.

Also, risk aversion is very much present in financial markets and weighing on riskier assets like stocks and commodities. Forecasts of a global recession could put more weight on these holdings as business sentiment and consumer spending tanks.

With that, worsening updates on the number of confirmed cases and fatalities in the US could weigh further on natural gas prices throughout the week. The EIA is due to report the natural gas storage for the past week and might show a larger draw of 30 Bcf versus the earlier reduction of 9 Bcf.