Natural gas could be close to forming an inverted head and shoulders pattern on its 1-hour chart as it bounces off the near-term area of interest to form the second shoulder. A break past the neckline could take place next, followed by a reversal from the slide.

The 100 SMA is below the 200 SMA to indicate that the path of least resistance is to the downside or that the selloff is more likely to gain traction than to reverse. However, the gap between the indicators is narrowing to reflect slowing bearish momentum and a potential bullish crossover.

Price is still moving below both moving averages for now, but an upward crossover could draw more buyers in and spur a stronger rally. In that case, natural gas could climb by around the same height as the reversal formation.

RSI is on middle ground to reflect consolidation conditions, barely providing any directional clues at the moment. Stochastic is pointing higher to reflect the presence of bullish momentum, and the oscillator has plenty of room to climb before indicating overbought conditions so buyers could stay in control. 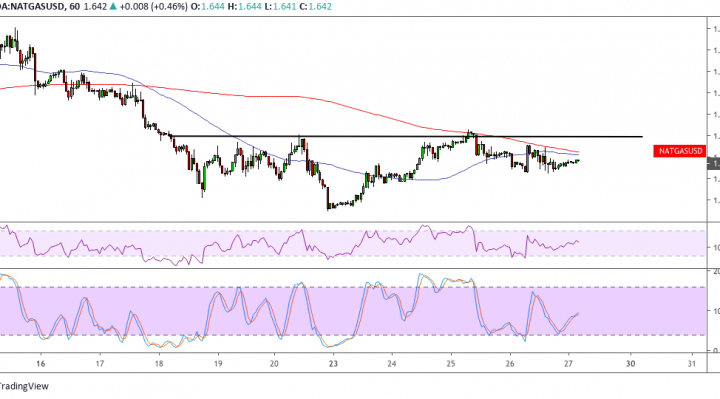 The Energy Information Administration reported a 29 Bcf decline in natural gas storage, reflecting some demand for the heating commodity in the past week. Weather conditions are starting to get warmer in some parts of the US and temperatures are expected to keep rising in the weeks ahead, but it appears that producers have also adjusted output ahead of time.

A bit of risk-taking was also seen in financial markets as traders look forward to the stimulus plan to be voted on by US officials. This could provide some temporary relief to businesses, which could also shore up risk appetite and demand for commodities.