Natural gas is moving inside a range, finding support at the $1.560 level and resistance at $1.700. Price is currently testing support and might be due for a bounce next.

However, the 100 SMA is below the 200 SMA to signal that the path of least resistance is to the downside or that support is more likely to break than to hold. If so, natural gas could fall by the same height as the rectangle formation.

Price is also moving below both moving averages as an extra indicator of bearish momentum. In the event of pullbacks, natural gas could hit a ceiling at the dynamic resistance levels around $1.630-1.640. Take note, though, that the gap between the indicators is narrowing to reflect weakening selling pressure. 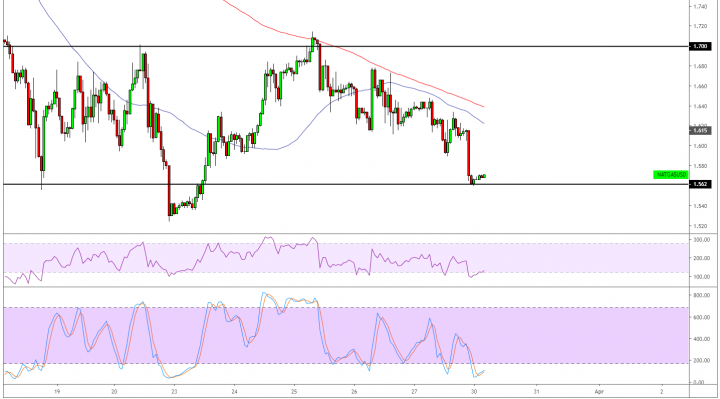 Natural gas is once again under weak footing as prices caved to slower demand and warmer weather conditions in the US. Although the government unveiled stimulus efforts to battle the impact of the coronavirus contagion on the economy, most traders don’t expect these to have an immediate or material impact on commodity demand or prices just yet.

Crude oil gapped down over the weekend as major oil producers still can’t reach an agreement to keep prices stable by limiting output. This is also spilling over to other commodities as demand for energy and fuel takes a hit.

Meanwhile, spring is rolling in and this would likely limit purchases of heating commodities as well. Producers have already adjusted output to account for lower demand, but inventory reports still suggest an oversupply. With that, natural gas could face more downside from here.