Natural gas has been moving sideways in a range with support at the $1.560 level and resistance near the $2.000 major psychological mark. Price looks ready for another test of support, and technical indicators suggest that selling pressure is picking up.

The 100 SMA crossed below the longer-term 200 SMA to indicate that the path of least resistance is to the downside or that support is more likely to break than to hold. If that happens, natural gas could be in for a slide that’s at least the same height as the rectangle pattern. Price is moving below both indicators, so these could hold as dynamic resistance levels in a pullback.

RSI is already heading lower to show that bearish momentum is present, and the oscillator has room to move south before reflecting oversold conditions or exhaustion among sellers. Stochastic is already in the oversold region, though, so bears could take a break and let buyers take over. In that case, natural gas could recover to the top of the range or at least until the middle at $1.800. 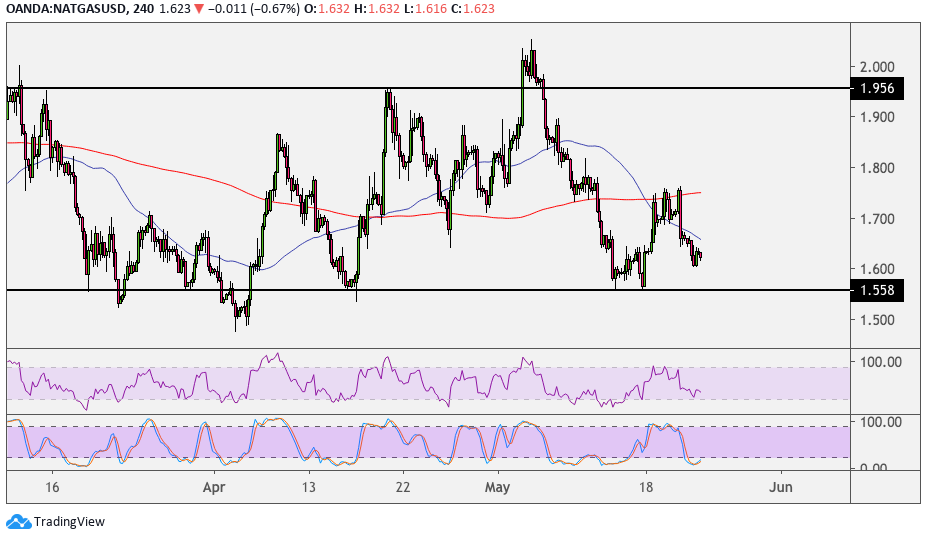 Natural gas stockpiles increased by 81 Bcf versus the projected gain of 83 Bcf, easing oversupply concerns and suggesting that demand remains supported. Note, however, that producers have trimmed output to account for the seasonal dip in purchases of heating commodities during summer months.

Warmer weather conditions continue to set in parts of the US, so demand for natural gas could continue to slide. However, the reopening of several states could mean stronger expectations for business and consumer activity, which might sustain risk appetite enough to boost commodities in general.

Meanwhile, concerns about a second wave of the pandemic and geopolitical tensions between the US and China could keep risk-taking in check for the time being, possibly limiting any gains for natural gas.