Natural gas is still trending higher above a rising trend line connecting the lows since mid-March. Price is closing in on a test of this support level that lines up with other inflection points.

The 100 SMA is above the 200 SMA to confirm that the path of least resistance is to the upside or that the climb is more likely to resume than to reverse. Price is finding support at the 200 SMA dynamic inflection point that coincides with the 61.8% Fibonacci retracement level as well.

If this holds as support, natural gas could recover to the swing high at $1.769 or higher. A break below the $1.650 area, on the other hand, could spur a selloff to the next area of interest.

RSI is already indicating oversold conditions or exhaustion among sellers, so turning higher could draw bullish pressure back in. Stochastic is also in the oversold region to show that sellers could take a break and allow buyers to take over from here. 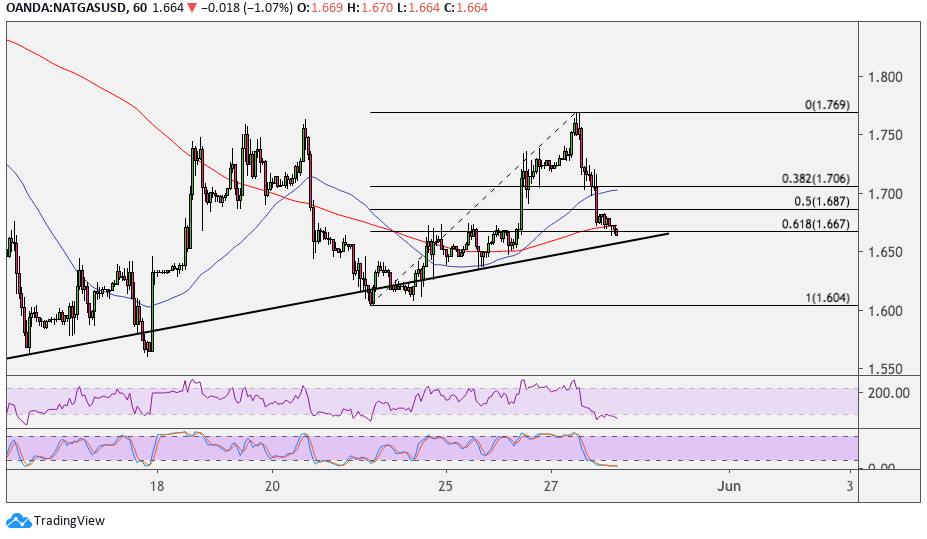 Natural gas took hits as traders might be dumping holdings as the expiry of the June contracts draws near. Recall that crude oil suffered huge losses and slumped to negative territory when futures contracts expired right when demand was feeble and oversupply became a huge concern.

“Hot high continues across California and the Southwest with record setting highs of 90s and 100s, locally 110s across Southwest deserts. However, this will be effectively countered by the rest of the US experiencing mostly comfortable highs of upper 60s to 80s. This includes Texas, the South, and Southeast where weather systems will stall this week with heavy showers and thunderstorms. A late season weather system will sweep across the Northeast late this weekend with showers and slightly cool highs of 60s and 70s.”