Natural gas has been trending higher on its 4-hour chart inside a rising channel, and price is already starting to encounter some support at the mid-channel area of interest. If this is enough to keep losses in check, price could make its way back up to the resistance levels marked by the Fibonacci extension tool.

The 100 SMA is above the 200 SMA to indicate that the path of least resistance is to the upside. In other words, the climb is more likely to gain traction than to reverse. However, price has fallen below the 100 SMA dynamic support as an early indication of selling pressure. Still, the 200 SMA and channel bottom might still keep a lid on losses in the event of a larger selloff.

RSI is already indicating oversold conditions or exhaustion among sellers and is starting to turn higher to signal a return in bullish pressure. Stochastic is also in the oversold region to signal that bears are tired and willing to let bulls take over. 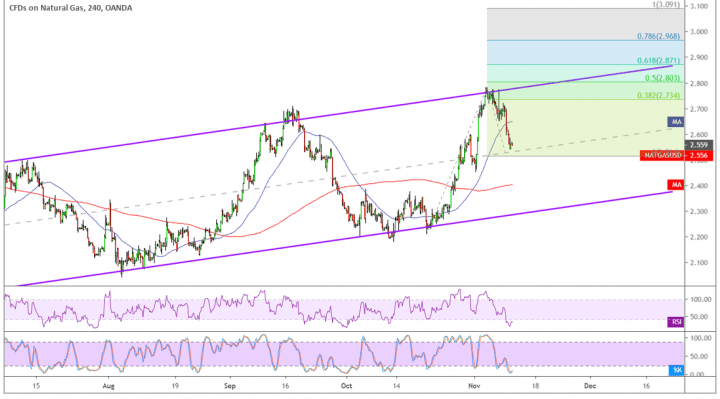 Natural gas prices are once again on weaker footing as weather forecasts predicted warmer temperatures for the next few days. According to a report from the National Oceanic Atmospheric Administration, most of the mid-west is covered with frigid temperatures but expectations of warmer temperatures in other parts could weigh on overall demand.

The next set of inventory figures could also determine whether natural gas is in for a deeper correction or if it could be ready to resume the climb from here.