Natural gas has formed higher lows and higher highs on its 4-hour chart, and price is currently bouncing off the mid-channel area of interest at $2.500. A continuation of the climb could take price up to the Fib extension levels next.

The 100 SMA is above the 200 SMA to indicate that the path of least resistance is to the upside or that the climb is more likely to gain traction than to reverse. However, price has fallen below the 100 SMA dynamic inflection point to signal that bearish pressure is returning. A larger pullback could take natural gas down to the channel bottom around $2.400 or at least until the 200 SMA dynamic inflection point.

RSI is already turning higher, though, and is about to cross the center line to signal that a pickup in bullish momentum is due. Stochastic is also moving higher so price could follow suit, but the oscillator is already testing the overbought region. 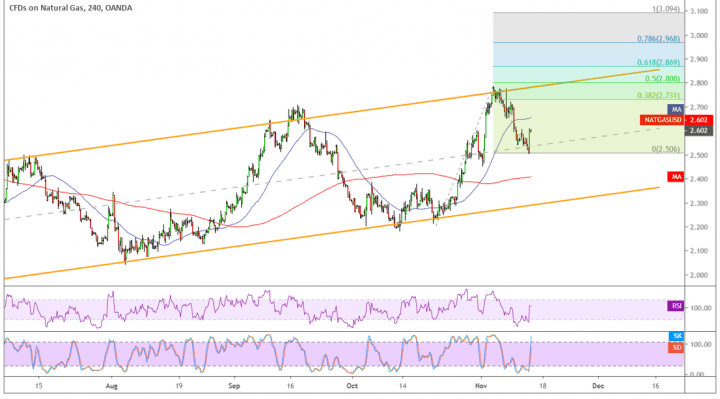 Up next, weather forecasts in the next week or two could impact natural gas trends and whether the climb could resume from current levels or if a deeper pullback is due. Expectations of cooler temperatures could prove bullish for the commodity as it would spur demand for heating supplies.