Natural gas could be in for a selloff from here as price already broke below the head and shoulders neckline at $2.550. Technical indicators are giving mixed signals, however.

The 100 SMA is below the 200 SMA to confirm that the path of least resistance is to the downside or that the selloff is more likely to gain traction than to reverse. Price is also trading below both moving averages to indicate that selling pressure is bound to pick up.

However, RSI is starting to pull up from the oversold region to signal that buyers are ready to return. Stochastic is also turning higher to indicate that bullish momentum might be back in play, possibly leading to a retest of the broken neckline or a pullback to the dynamic resistance at the moving averages. 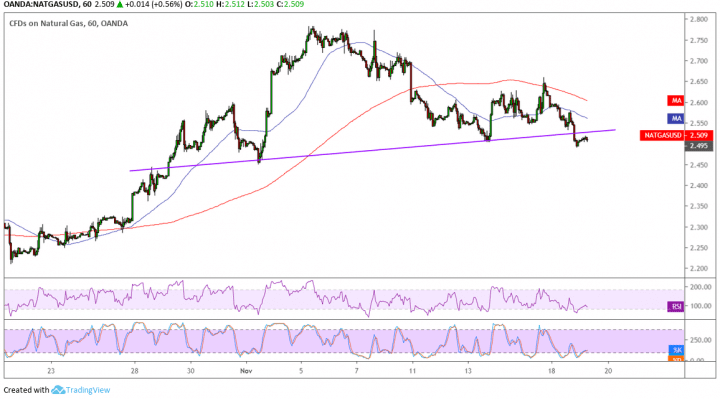 Natural gas prices are on weaker footing as temperatures have been milder in the past few days and could continue to stay that way in the coming ones, thereby reducing demand for heating commodities.

Traders are now looking ahead to the release of the inventory data from the Department of Energy to gauge whether or not supply conditions are adjusting or if demand remains feeble.

Apart from that, major swings in market sentiment could also influence near-term price action, especially since commodities are strongly affected by updates on US-China trade talks. So far there has been a lack of progress, but market watchers seem hopeful or at least cautious.

Still, any sign of conflict could bring risk aversion back on the table and weigh on natural gas, as well as other commodities and high-risk assets. After all, a prolonged trade war would keep dampening business sentiment and likely drive up recession odds, dragging commodities further south.