Natural gas could be in for a strong rally as it attempts to complete a double bottom reversal pattern on its daily time frame. Price is inching close to the neckline around $2.900 and a break higher could set off a climb that’s the same height as the formation.

The 100 SMA is still below the 200 SMA to hint that the path of least resistance is to the downside. In other words, there’s still a chance for the selloff to resume from here. Then again, the gap between the indicators has narrowed to reflect slowing bearish pressure and a potential bullish crossover. If that happens, more buyers could join in and set off a stronger rally.

RSI is already indicating overbought conditions and might be due to turn lower later on while stochastic is also reflecting exhaustion among buyers. In that case, there’s still a chance that the neckline might hold as resistance and send price back to the lows around $2.100-2.200. 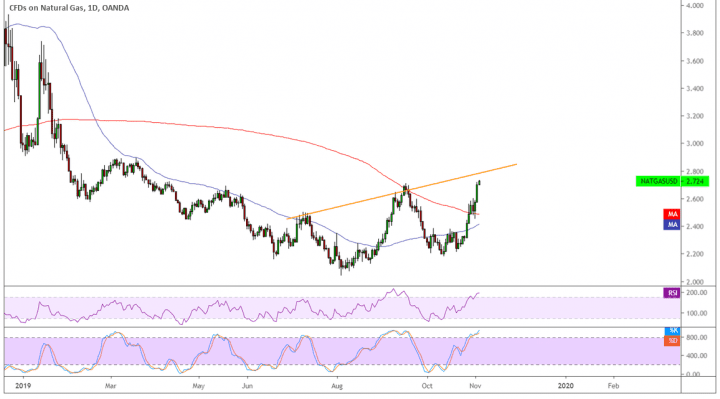 Natural gas continues to advance as cooler weather conditions are setting in across the US, driving up demand for heating commodities. At the same time, expectations that supply could be weighed down by weather disruptions resulting to shutdowns of some facilities are also keeping prices propped up.

Risk appetite has been in play over the past week as geopolitical risks are subsiding. For one, there are rumors that a trade deal between the US and China might be ready before the end of the month. Investors were also able to breathe easy as the Brexit deadline was extended to January next year.

Up ahead, inventory data could determine where short-term price action is headed, with a smaller build in inventories likely to spur another leg higher. On the other hand, a larger build could lead to dips in natural gas prices.