Natural gas has been trending higher on its short-term time frames and is moving above a rising trend line on its 1-hour chart. Price is encountering a road block near $2.800 and could be due for a pullback from here.

Applying the Fibonacci retracement tool on the latest swing low and high shows that the 50% level lines up with the rising trend line around $2.600 while the 61.8% level is closer to the 200 SMA dynamic support.

On the subject of moving averages, the 100 SMA is safely above the 200 SMA to indicate that the path of least resistance is to the upside. In other words, the uptrend is more likely to gain traction than to reverse. However, natural gas price has fallen below the 100 SMA dynamic support to reflect a bit of selling pressure.

RSI is also pointing lower to suggest that bears are in control at the moment, but the oscillator is nearing the oversold region to signal exhaustion. Turning higher could mean that buyers are ready to return and take natural gas price back up to the swing high or beyond. Stochastic is already dipping into the oversold region to show that sellers are already tired and might be willing to let buyers take over soon. 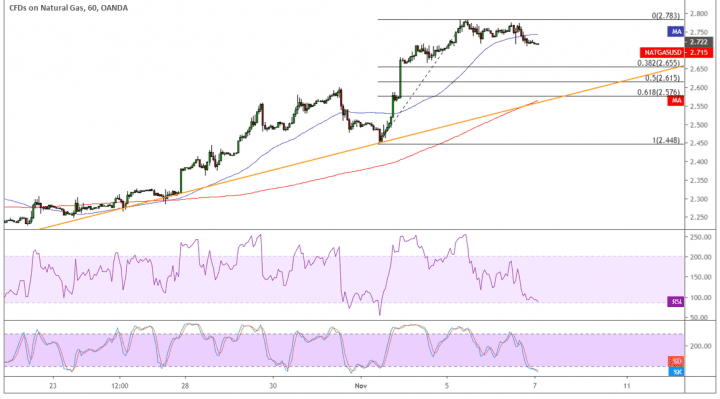 The commodity has been gaining traction thanks to cooling temperatures in the US driving up demand for heating commodities. Besides, possible weather disruptions owing to hurricanes near the Gulf states might curb production if shutdowns occur.

The next potential catalyst is the release of inventory data as this could confirm whether or not demand is keeping up with supply. A large build could keep the correction going as this could signal that demand remains feeble while a smaller build or a reduction could allow the climb to resume.