Natural gas is still in correction mode but is already forming a reversal candlestick pattern at the support level around the rising trend line on its 4-hour time frame. If this is enough to keep losses in check, price could resume the climb to the upside targets marked by the Fibonacci extension tool.

The 100 SMA is above the 200 SMA to indicate that the path of least resistance is to the upside or that the climb is more likely to gain traction than to reverse. The gap between the indicators is widening to reflect increased bullish momentum.

RSI is heading lower to show that selling pressure is still in play, and the oscillator has yet to reach the oversold region. Stochastic is already pulling up from the oversold territory to indicate that buyers are starting to return. However, a break below the trend line support and 100 SMA dynamic inflection point could set off a reversal from the climb. 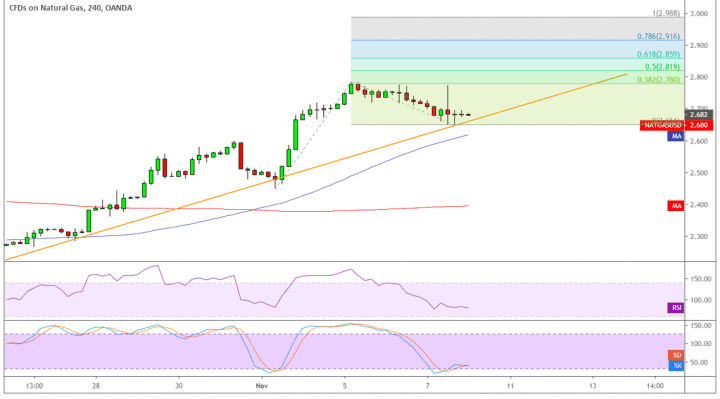 Natural gas prices are still on weak footing even though the Energy Information Administration reported a smaller than expected build in stockpiles. The Department of Energy reported on Thursday that natural gas in storage was 3,729 Bcf as of Friday, November 1, 2019. This represents a net increase of 34 Bcf from the previous week versus expectations of a 53 Bcf build.

Still, there’s a good chance that the uptrend could stay intact as the weather  is also expected to be much colder than normal over the next 6-10 and then turn slightly milder over the 8-14 days forecast according to the latest estimates from the National Oceanic Atmospheric Administration.