Natural gas has formed lower highs to trade below a descending trend line on its short-term time frame. Price recently bounced off this resistance and could be setting its sights back on support next.

Price is close to the 50% extension near the swing low of $2.200, which might be enough to keep losses in check. A bounce off this level could lead to another test of the trend line that’s close to the 100 SMA dynamic inflection point.

On the subject of moving averages, the 100 SMA is below the longer-term 200 SMA to indicate that the path of least resistance is to the downside or that the selloff is more likely to gain traction than to reverse. However, the gap between the indicators is narrowing to reflect weakening bearish momentum.

RSI is turning up to show that buyers are regaining the upper hand and could push for another test of the resistance or perhaps a break higher. Stochastic is also indicating oversold conditions or exhaustion among sellers, so a takeover by buyers might follow. 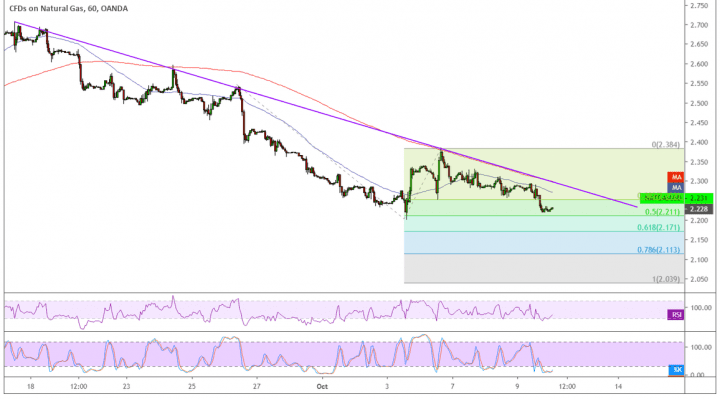 Natural gas prices are on weaker footing leading up to the inventory report from the Department of Energy as expectations are for a build of 99 Bcf, and traders are still wary of the larger than expected build in the previous release. The EIA reported that natural gas inventories increased by 112 Bcf for the week ending September 27, larger than the five-year average of 83 Bcf.

Still, there could be some downside pressure on supply and upside pressure on prices as there are three storms that have a small chance of beginning a tropical cyclone in the Atlantic.