Natural gas recently broke below the bottom of its ascending channel on the 1-hour chart to signal that a reversal from the climb might follow. Price also completed its retest of the broken support, and applying the Fibonacci extension tool shows the next potential downside targets.

The 50% extension seems to be holding so far, and the 100 SMA is above the 200 SMA to indicate that the path of least resistance is to the upside. The 100 SMA appears to be holding as dynamic resistance, though, and could still send natural gas to the next downside targets. In that case, price could dip to the 61.8% extension at $2.295 or the 78.6% level that lines up with the 200 SMA dynamic inflection point and swing low. The full extension is located at $2.256.

RSI is treading sideways to reflect consolidation while stochastic is moving down to show that selling pressure is in play. The latter is inching close to the oversold region, though, so bears might be exhausted soon and willing to let buyers take over. 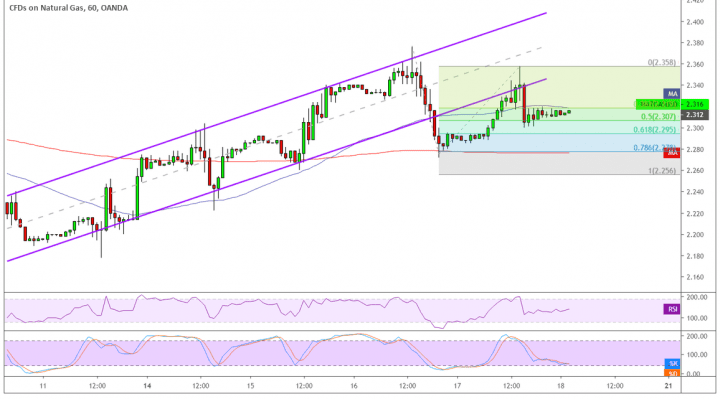 Natural gas found support on a smaller than expected increase in stockpiles as reported by the Department of Energy. This suggests that seasonal factors are starting to kick in, with demand rising from cooling weather conditions and supply dropping from expected hurricanes in the Gulf states.

There is one weather disturbance in the Gulf of Mexico that is expected to turn eastward making landfall in Louisiana and then Florida, possibly leading to temporary shutdowns in some natural gas facilities. On the demand side, temperatures is expected to be cooler than normal over the next 8-14 days according to the National Oceanic Atmospheric Administration, likely leading to a boost in demand for heating commodities.