Natural gas has formed lower highs and higher lows to create a symmetrical triangle pattern on its short-term time frame. Price is bouncing off support and could be due for a test of the triangle top at $2.340 next.

The 100 SMA is above the 200 SMA to indicate that the path of least resistance is to the upside or that support is more likely to hold than to break. However, price is trading below the 100 SMA so this could keep holding as dynamic resistance.

A break below the triangle support could set off a drop that’s the same height as the chart formation, which spans $2.260 to $2.370. Similarly a break above the resistance could lead to a climb of the same size.

RSI is treading sideways to reflect consolidation while stochastic seems to be pulling higher without reaching the oversold region, suggesting that bulls are eager to jump back in. 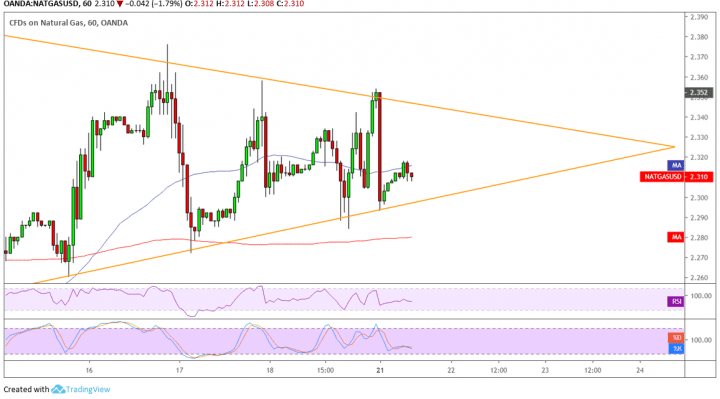 However, risk aversion kicked back in as markets reopened on the lack of positive updates. Traders also seem to be waiting for more market data to see if the seasonal bounce in natural gas can gain any traction. Still, cooler temperatures across the US could keep demand for heating commodities afloat, thereby supporting natural gas prices.

Prices continued to be influenced by “significant model differences on the intensity of cold later this month,” according to Natural Gas Intelligence. Apart from that, weather disturbances that could lead to temporary shutdowns in some natural gas facilities might also keep a lid on supply, thereby propping prices higher.