Natural gas has formed higher lows and higher highs to trade inside a broadening wedge formation. Price is currently testing support and could be due for a move to the top that lines up with the Fibonacci extension levels.

The 100 SMA is above the longer-term 200 SMA to indicate that the path of least resistance is to the upside. In other words, support is more likely to hold than to break. Price is already below the 100 SMA dynamic inflection point as an early signal of bearish pressure and a possible move below support.

But if the bottom of the wedge holds, natural gas could recover to the swing high at the 50% Fibonacci retracement level or the 61.8% level closer to the wedge top around $2.700. Sustained bullish momentum could take natural gas to the 78.6% level at $2.726 or the full extension at $2.780.

RSI already reached the oversold region to signal that sellers are tired and allowing buyers to take over. Stochastic has a bit of room to head lower before actually indicating oversold conditions but already seems to be bottoming out to signal that buyers are eager to return. 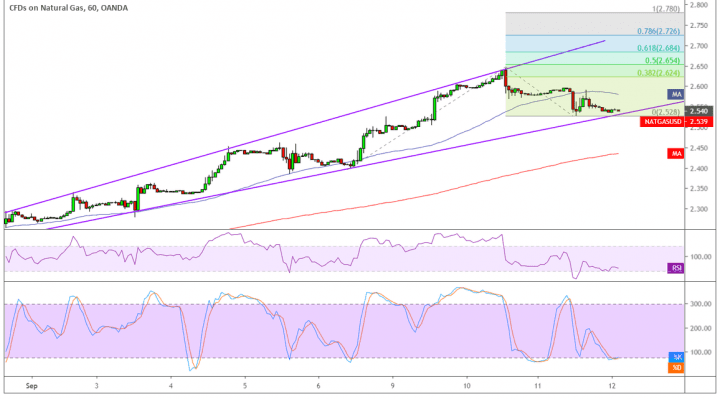 Natural gas prices are in the middle of their “seasonal bounce” as warmer weather conditions fade and cooler months approach, thereby leading to a pickup in demand for heating commodities. Traders are anticipating a draw of 85 Bcf from the report to be released by the Department of Energy.

A larger than expected reduction could further ease oversupply concerns and provide more traction for the bounce, indicating that purchases are already starting to ramp up while production tries to keep up. At the same time, the start of the hurricane season in the US could also keep supply in check over the coming weeks.

On the other hand, a buildup or smaller than expected reduction might mean a break below the wedge for natural gas and a corresponding decline.