Natural gas continues to gain traction on its long-term bounce, making its way back to the broken rising trend line on its daily time frame. This lines up with the potential resistance at the Fibonacci retracement levels.

In particular, the 50% level might be closest to the trend line around the $3.000 major psychological resistance, which might be enough to keep gains in check. Price is currently testing the 38.2% retracement level that lines up with the 200 SMA dynamic inflection point.

On the subject of moving averages, the 100 SMA is below the longer-term 200 SMA to indicate that the path of least resistance is to the downside. In other words, the selloff is more likely to gain traction than to reverse. The gap between the indicators is narrowing, though, so bearish pressure might be fading and a bullish crossover might happen soon.

Still, RSI is in the overbought zone to signal exhaustion among buyers, and turning lower could indicate that sellers are regaining the upper hand. Stochastic is also in the overbought region and is starting to head south, so price might follow suit. 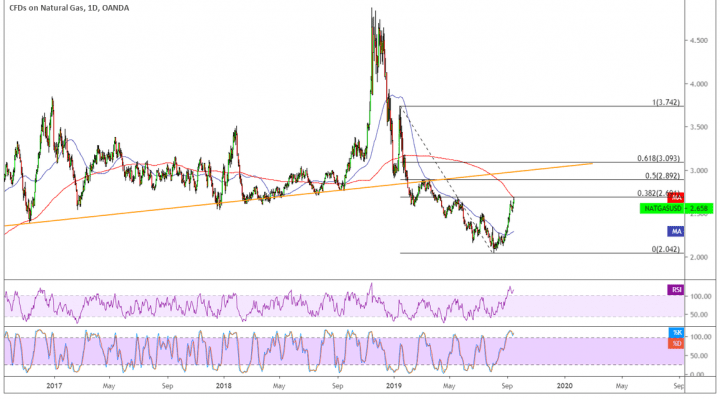 Strengthening demand and lower output forecasts are propping natural gas prices higher these days, supporting the so-called seasonal bounce around this time of the year. The hurricane season in the US might lead to some outages or shutdowns in key areas, which could dampen production, while cooling weather conditions support purchases of heating commodities.

At the same time, improving risk sentiment has been positive for commodities in the past week. The US and China appear to be making trade concessions, thereby improving business outlook and demand in the near future. Apart from that, the dovish tilt of most major central banks is also supporting risk-taking as investors anticipate stronger lending and spending with low interest rates.